It’s not fair! Why has Ireland got Ruairi Quinn, while we’re stuck with Michael Gove? 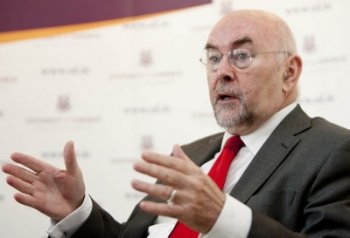 If only the UK had an education minister like Ireland's Ruairi Quinn.

Mr Quinn is, bit by bit, challenging the stranglehold that the Catholic Church has over education in the Republic.

He does it in a proper, diplomatic way, of course, but he has already begun a long-term process of taking some of the country's schools out of Catholic control and handing them over to more ecumenical interests.

Now Mr Quinn has set the cat among the pigeons by questioning the amount of time that is spent teaching religion in Irish primary schools.

According to the Irish Department of Education's rules, 30 minutes a day – two and a half hours a week – is devoted to religion, compared with 60 minutes per week each for science and physical education (PE). But a recent Irish National Teachers Organisation (INTO) survey found over 70% of teachers were spending more than the required time on religion. The extra time usually goes on preparing children for First Communion and Confirmation.

Mr Quinn last week faced an unreceptive – bordering on hostile - annual conference of the Catholic Primary School Managers Association. He asked them: "Can we really afford to continue providing a mere 60 minutes, per week on scientific instruction or, for that matter, 60 minutes per week of PE?" He suggested that preparation for the sacraments could take place in the parish, outside school hours.

Needless to say, his speech did not go down very well with the Catholic education hierarchy, who take for granted that the nation's schools at their disposal as a means of propagating their religion.

CPSMA vice chairperson Fr Denis McNelis, said they were happy to talk about the timing and method of the teaching of religion, but "I think there would be widespread disapproval on the part of parents and most teachers if we were to go down the road of removing entirely sacramental preparation from the school".

Of course, the Catholic Church has always put huge emphasis on its influence in education.

It realised centuries ago that you need to get at children before they are at an age when they might be able to resist religious indoctrination. They need to be told that they are Catholics at a very early stage in their lives and the message must be reinforced relentlessly.

School – particularly primary school – is the perfect place for this brainwashing to be accomplished. For the rest of their lives they will regard themselves as "Catholic", even if they never set foot inside a church again..

Every concordat that the Vatican manages to wangle with a state will always give them privileged access to education.

The Church will say: "If we didn't provide it, there would be no education." This may be true in some parts of the developing world, but the quid pro quo is that the Church then uses its schools for relentless indoctrination and evangelisation.

Ruairi Quinn hopes to challenge this, although the Catholic Church in Ireland still controls almost all the schools in the country (despite these being publicly-funded schools) and will not give them up without resistance. The minister told reporters after the conference that while he had no current plans for changes to existing arrangements, he insisted the question he was posing was not "rhetorical". He added science was important and "it all starts in primary."

Irish primary pupils spend 4% of their time on science – half the international average – and 10% on religion, more than double the global norm.

The recommended minimum one hour a week for PE is the lowest of 30 EU countries.

Mr Quinn is an astute politician. He won't have a face-to-face confrontation with the Church but they must now be aware that he's got them in his sights.

I repeat, somewhat ruefully, where is the UK's Ruairi Quinn?