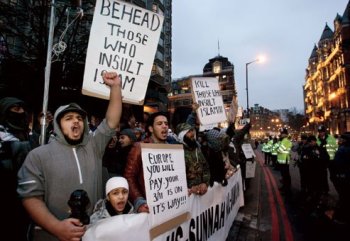 Samuel Huntington's book The Clash of Civilizations aroused a storm of interest when it was published in 1996. Its basic thesis was that in the aftermath of the Cold War, the fundamental antagonism among nations would be on the basis of 'civilisation' – taken to mean culture that encompasses language, history and religion – rather than ideology or economics. He posited eight major contemporary civilisations and suggested that conflict would most likely arise at the intersection of these: Sinic [Chinese], Japanese, Hindu, Islamic, Orthodox, Western, Latin American, and African. The thesis was heavily criticised on the grounds that it was much too generalised and simplistic and so limited in its relevance and applicability.

Despite its grave limitations, the notion of 'clash' was, nonetheless, appealing, including to those who vehemently disagreed with the thrust of Huntington's argument. For example, Tariq Ali's The Clash of Fundamentalisms and Gilbert Achcar's The Clash of Barbarisms were clearly inspired by and, to some extent, responses to Huntington's work.

Since September 11 2001 however and the 'war on terror', the notion of the existence of a clash between two of Huntington's civilisations – the Western and the Islamic worlds – has gained traction. A common refrain was that the war on terror was really a war on Islam waged by the US/West; but this was an assertion without any basis in reality. Nevertheless, a clash arose between certain ideological forces within each geopolitical tectonic plate, specifically, between Islamism and Zionism (including Christian Zionism). That these two ideologies are in firm opposition is not in doubt; in that Zionism is a European/western ideology and the country whose constitution is based on it, Israel, is located in a Muslim-majority region, their clash manifests itself naturally in the Islamic world and has done so acutely since 1948. However, given that millions of Muslims have settled in western countries, increasing numbers of whom have espoused Islamism, this clash has, in recent years, also arisen with some intensity in the western world.

The root cause of this particular clash is a tract of land – Palestine – and its colonisation by Zionist settlers from the late nineteenth century, which ultimately led to the creation of the Jewish state and expulsion from it of the majority of the indigenous, mainly Muslim, population. This conflict is a running sore that has shown no signs of resolution and has naturally received much attention. But, in the modern era, particularly in the twenty-first century, this clash is also about identities and, more specifically, dual identities. Millions of Jews not living in Israel strongly identify with the Jewish state – indeed, for many, being Jewish is tantamount to being Zionist, that is, they show their allegiance to the state of Israel. This is not necessarily related to the fact that all Jews have an automatic right to Israeli citizenship. Hence, an American Jew, British Jew, or French Jew has loyalty to his/her country of residence and citizenship but also to Israel – so that there is a dual identity. Given their close alliance, conflicts between these three countries and Israel are largely non-existent; hence conflicts between the national identities are also immaterial, that is to say, the dual identity retains its cohesiveness.

The situation of Muslims in the west is analogous but also significantly different. Millions have settled and taken up citizenship in their adopted countries. Unlike Jews, however, they are not indigenous but migrants or (more recently) asylum seekers. As is the norm for migrants, the first generation retains strong links and affinity with its origins in terms of country, region, ethnicity, language, religion, and culture. Interestingly – and counter-intuitively – such strong links and affinities have been passed on to a significant extent to subsequent generations by some (though not all) groups. In Britain, for example, second and even third generation Asians have shown this trait. By so doing, they espouse strong dual identities to the extent that, for some, the identity attached to the 'motherland' takes precedence over that of the country and society of residence and citizenship.

My contention is that this has become a prevalent phenomenon among large numbers of Muslims in the west, that is to say, their most important indicator of identity is to their religion – and by extension – to Muslim countries and lands; in sum, to the global umma. It follows that any actual or perceived harm done to the faith and to Muslim lands is felt with great intensity and, as a natural corollary, equally great animosity is shown towards the perpetrators of such harm. At its most extreme, such animosity translates into Islamism and a profound Islamic identity. As we have witnessed since September 11, this can, in extremis, engender violent opposition, that is, jihadist behaviour.

My further contention is that dual identities engendered in Islamism and Zionism are of a deeper magnitude than the widespread phenomenon of the 'hyphenated identity' that has long been present as a marker of ethnic, racial, or geographical origins. Thus, in theUS, there is the well-established phenomenon of the 'hyphenated American' (such as African-American, Asian-American, Irish-American, Italian-American etc). There is likely to be some affinity to the country or continent in the first part of the hyphenation but – admittedly in the absence of robust empirical evidence – the presumption is that this is not likely to be as intense as that residing in Islamism or Zionism and so not give rise to anything like the same level of political campaigning and support. An exception can, however, be made with regard to Cuban-Americans, large numbers of whom do appear to be characterised by a strong campaigning zeal relating to the Cuban (and anti-Castro) part of their identity. The obverse is likely to be the case for African-Americans, perhaps the overwhelming majority of whom – we can hypothesise – have little or no emotional or physical affinity to the African continent or to any African country; as such, this is predominantly an ethnic marker, interchangeable with 'black-American'.

There are, of course, substantive reasons as to why certain identities are stronger than others. At its core, in the case of Zionism, this emanates from the aftermath of the Nazi holocaust so thatIsraelis thought of as a safe haven for world Jewry. In the case of Islamism, part of its appeal emanates from solidarity with fellow Muslims – the Palestinians (leaving aside that some are Christians) – who were expelled from their homeland. This is compounded by the perception that western powers were ultimately responsible for the creation of the Jewish state that led to this nakba and have, moreover, provided unstinting support toIsraeldespite this historic and continuing injustice. A further contributing determinant of a strong Islamist identity is the belief, noted above, that there is a war on Islam – the apotheosis of which is the US-led 'war on terror'.

So there has arisen a clash between these two ideologies and political movements: most acutely so in the Middle East but increasingly so in many western countries. In the former, the war in Lebanon in the summer of 2006 can be thought of as the first war between Zionism (Israel) and an avowedly Islamist movement (the Hezbollah). There have also been severe tensions between Israel and the Islamic Republic of Iran. A war has not (yet) broken out between these two countries but, given Iran's strong support for Hezbollah, the 2006 war in Lebanon can be viewed as a proxy. The sheer antipathy between these ideologies suggests that another conflagration cannot be ruled out which, next time, would also in all likelihood involve Iran in direct military action.

Less explored and more recent is the 'softer' clash between Islamism and Zionism in many western countries. Though nowhere near as serious as that obtaining in the Middle East it is, nonetheless, of importance and ought not to be proverbially brushed under the carpet: if the clash in the Middle East has often taken the form of wars, the clash in the west is akin to Orwell's 'war minus the shooting'.

Throughout Western Europe in particular and to a lesser extent also in North America, there has, in the post 9/11 era, arisen the desire on the parts of many of the governments of these countries to increase the integration of Muslims into mainstream society and to improve social cohesion. These laudable objectives and policy aims have gained focus because of widespread concerns regarding the situation of Muslim migrants, notwithstanding the fact that a key motivating factor has been to wean young Muslim males away from jihadi-inspired acts of terrorism. I wish to argue that the antagonism between Islamism and Zionism in the west is a significant threat to such integration and social cohesion; my aim is to draw attention to this explicitly in terms of a clash. This has been an important lacuna that needs to be highlighted, one which has rarely been acknowledged as such.

Some might argue that examining these societal issues through the prism of an ethno-religious political clash is much too pessimistic an approach: rather, what is being played out in western countries is nothing more than a typical rivalry in democratic, pluralistic, societies where passionate support and campaigning zeal for causes, with attendant argument and debate, is a healthy sign.

My response to such a criticism is that it is, of course, true that millions of people are extremely emotionally involved with myriad of causes and activities – perhaps none more so than support for sports teams. But the kind of chasm that is evident between Islamists and Zionists is, I would argue, of a different order. It means that members of the two groups tend to view each other through the mono-dimensional prism of identity on which a very fixed judgement has already been made. The consequence is necessarily an acute prejudice whereby suspicion abounds to the extent that normal human interaction is severely curtailed. This is certainly an issue deserving of in-depth research and substantive policy proposals.

Dangerous Liaisons: the clash between Islamism and Zionism by Rumy Hasan, was published by New Generation Publishing in February, 2013

Rumy Hasan is a senior lecturer at Sussex University. This article was originally published by Open Democracy and is reproduced with the author's permission