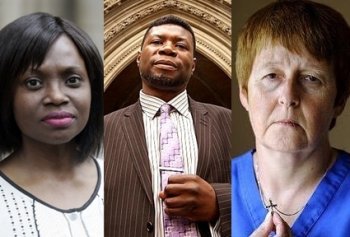 You've got to give them full marks for sheer bloody-mindedness.

I'm talking about the paranoid Christian activists obsessed with the idea that they are being persecuted in the workplace. They have brought numerous cases to British courts to try to prove this, and all of them have failed. They have been to tribunals, Crown Courts, High Courts, Appeal Courts, the Supreme Court and then the European Court of Human Rights (ECtHR). They failed to convince any of them that there was any of the discrimination they claimed.

Instead of just accepting that they were wrong, they are now making a final attempt by applying for a hearing at the Grand Chamber of the European Court of Human Rights – which has the power to overturn ECtHR judgments. But the Grand Chamber hears only very few cases, so the odds are stacked against them getting a hearing.

The papers they have submitted to the court concern the cases of Shirley Chaplin, the nurse who was made to remove a dangling necklace (that happened to have a cross on it) because of health and safety concerns; Gary McFarlane, the Relate counsellor who refused to treat gay couples equally; and Lillian Ladele, the Islington registrar who refused to provide civil partnerships for same-sex couples.

All these cases were rejected by the ECtHR in Strasbourg earlier this year, although in the case of Lillian Ladele, two judges issued a dissenting judgment claiming that "conscience is being sacrificed on the altar of obsessive political correctness".

This time Ms Ladele's lawyers will argue that her case could have "huge implications" regarding whether other workers, such as teachers or social workers, will be forced to "promote" gay marriage after it becomes law.

According to newspaper reports, the trio's representatives will up the already inflated rhetoric, arguing that "British courts are applying double standards towards Christians for 'political' reasons," and that human rights laws have been used to "effectively outlaw beliefs which have been held for millennia while affording special recognition to minority opinions on anything from fox hunting to climate change."

The Daily Telegraph, which has seen the papers that have been submitted, reports that they claim:

"Self-evidently absurd" health and safety rules are being used as a "ruse" to prevent Christians wearing crosses while outward expressions of other faiths are welcomed, they say. An overzealous and one-sided interpretation of rules has brought human rights law itself into disrepute and exposed the British judiciary itself to "ridicule".

In January, the lower chamber of the Strasbourg court ruled in favour of Nadia Eweida, a BA check-in clerk who was told the cross she wore contravened the airline's uniform policy – which has since been changed.

Ms Eweida, and her supporters at the Christian Legal Centre, have since trumpeted this as a "major victory" – but, in fact, nothing has changed. The court ruled in her favour because, in the light of much adverse publicity, BA rapidly changed its policy to accommodate her. The court reasoned that if the airline could change its policy so quickly and easily, it could not have been essential in the first place.

However, crosses can still be banned in the workplace if there is a good reason to do it, one that could be justified in court. That is what happened in the case of Shirley Chaplin. The hospital she worked for ruled that her jewellery posed a health and safety risk, and the court accepted that it was a reasonable justification for asking her to remove it.

In the case of Gary McFarlane, barrister (and master of hyperbole) Paul Diamond argues: "He was dismissed for his 'thoughts' and 'religious beliefs' on a wholly theoretical basis. The case directly raises the question of conscience and 'thought crime'."

The lawyers say in their papers:

"The United Kingdom has an overall good record on human rights; in recent years this has come into sharp contrast due a number of decisions made against Christians.

"Christian views on the upbringing of children by two parents have not been recognised as a religious view at all; whilst views on global warming, fox hunting, and even the BBC as a public broadcaster have been recognised."

Andrea Minichiello Williams, director of the Christian Legal Centre, which is supporting Mr McFarlane and Mrs Chaplin, also increased the volume by saying:

"We are throwing down the gauntlet to David Cameron to decide once and for all whether he is in favour of religious freedom or not. These are cases where the only victims were the Christians trying to live out their faith in the workplace but who were driven out for doing so. As the pleadings in Gary McFarlane's case make clear, Christians are now being punished for 'thought crimes'."

Although it's unlikely that these cases will get a further hearing, we can't be complacent. We have only to look at what happened in the Lautsi case to see that when religion gets into gear it can throw justice off course. But the Lautsi decision was reversed mainly because the Vatican wanted it reversed. I don't think Andrea Minichiello Williams or Paul Diamond have quite the same clout.