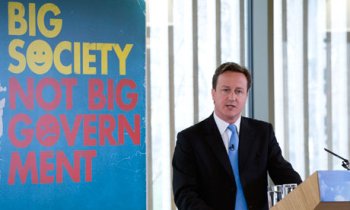 It seems The Big Society is back – if only for the last nail to be driven into its coffin.

First we have a right-wing Catholic think tank, the Von Hügel Institute, publishing a report describing what was once Mr Cameron's flagship idea as a "genuine and interesting attempt" to tackle Britain's major social problems. The report looks at how the Big Society could be organised along the lines of Catholic social teaching. It says that the Government has already made many legislative changes on these lines and therefore it isn't "just rhetoric".

But the report seems to have arrived a little late at the party and to have missed the boat – which is just as well because the good ship Big Society seems to have sailed into the Bermuda triangle and, as the Archbishop of York, John Sentamu put it last week has "vanished without trace".

At the annual civic dinner of Sunderland Council at Washington Old Hall, Tyne and Wear, Sentamu said: "No politician refers to it any more. Was it simply a sound-bite, a ruse that played well with focus groups, but that was easily pushed aside when put under greater scrutiny? The cynic might suggest that it wasn't so much a celebration of a thriving society where everyone looks out for their neighbour, but rather a ploy to get community groups to pick up the cost of local government cuts."

Also dissenting from the Von Hügel view is Helen O'Brien, chief executive of the Catholic Social Action Network. She said the phrase "Big Society" had become discredited. "Should we call what we're doing the Big Society?" she asked at the launch. "That phrase hasn't done anything."

The Catholic weekly magazine, The Tablet, also thinks the Von Hügel Institute has got it wrong. In an editorial it wrote:

Devotees of Catholic Social Teaching, by no means all of whom are Catholics, hailed David Cameron's Big Society with some enthusiasm. They already knew that Catholic ideas about how to organise a good society were being excavated by his party for useful guidance, not least the key principle of subsidiarity. And the former Tory leader and founder of the Centre for Social Justice, Iain Duncan Smith, who is himself a Catholic, made no secret of where he was drawing his ideas from for the future of the welfare state. Yet the Big Society project has turned out to be a big disappointment. Even the Coalition Government itself seems to have gone cool on it.

The editorial says that the Von Hügel Institute report suffered from bad timing. It was commissioned at a moment when there were big hopes that religion would be stepping in to help the Government run the country's welfare provisions – along similar lines to the German model.

But in Germany the Church receives vast amounts of taxpayers' cash to do the job (and does it with discrimination and often spiteful retribution on those employees who aren't toeing the Catholic line).

In Britain, the Government hoped that charities and churches would be able to somehow conjure up the money to replace that which was being cut from welfare budgets.

The Tablet, though, recognises that the "voluntary sector" has become almost entirely dependent on local authority grants. Now that such funding has been "scythed" by Government cuts, the voluntary groups simply can't operate on any significant scale any more. And because living standards are falling, donations to charities have also fallen — by something like 20% — which means they're finding it more and more difficult to draw on their own resources to fill the welfare gap.

Many Christian charities had already worked out that the Government was cynically using them to try to cover the severity of the cuts they were making. They also recognised that when the money ran out and the services collapsed, they would be the ones who would take the blame. Many had already made clear that they weren't prepared to be the fall guys.

The Government should be made to take responsibility for the cuts that are having such a cruel impact on the most vulnerable in our society. Churches should not attempt to rescue them (which they don't have the resources to do, anyway) and instead hold them to account for the misery they are causing.