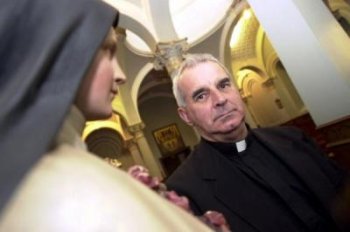 It seems there is no end to the woes of the Catholic Church in Scotland in the wake of Cardinal O'Brien's abrupt departure.

The latest reports in the media examine the Scottish Catholic Church's record on dealing with historic allegations of child sex abuse by clergy, with one former investigator hired by the Church in the mid-1990s now considering a formal request to the police to investigate the Church's handling of abuse cases.

The revelations confirm the now all too familiar pattern of protecting the Church's reputation first and foremost – allegations not taken seriously enough or simply dismissed, offending priests quietly moved to another parish where they could offend again, and the Church continuing to refer to the cover-up with euphemisms like "errors" in handling cases.

The Church's first line of defence is to claim that it had tackled the problem when it introduced formal guidelines in 1999 for the protection of children. But it was only five years earlier that O'Brien's predecessor Cardinal Winning had enraged lay Catholics by stating that it was up to the victims of abuse to go to the police, not the Church authorities. A spokesman for the Royal Scottish Society for the Prevention of Cruelty to Children observed at the time that the Church in Scotland had "dealt with this issue in a shabby, damaging and incompetent way." There is now emergent evidence that Cardinal Winning's view was the one that still retained currency after 1999.

It gets no better for the Church when the names of those dismissive of investigators' concerns are recalled. The investigator appointed by the Church in the mid-1990s suggested that the investigation remit be widened to include "inappropriate relations" among the clergy. Given the recent revelations surrounding the 'inappropriate behaviour' of Cardinal O'Brien with young priests and seminarians, this suggestion seems to have been made with some merit. But Bishop Roddy Wright of Argyll and the Isles had, according to media reports, expressed his disquiet at this. Bishop Wright, we now know, resigned shortly after this in the mid-1990s when it became known he had father­ed a child with a parishioner. He then abandoned his diocese and his vocation to marry a divorcee. No wonder the Bishop had been uncomfortable at the prospect of an investigation of 'inappropriate relations' among the clergy. It is not hard to see now that it may also have unsettled the then Archbishop of St Andrews & Edinburgh, one Keith Patrick O'Brien.

Bishop Wright was not alone in his disavowal of priestly celibacy. More recently we have had 'Father Flash' Roddy MacNeill from the island of Barra (who had an affair with his first cousin and is believed to be the father of her child) and Father Gerry Nugent who admitted to having sex with Angelika Kluk, (subsequently murdered by Peter Tobin who buried her body under the floor in Nugent's church, St Patrick's, where he had been working). There was also the case of Monsignor Creegan in the Diocese of Dunkeld, whose long-term mistress confessed to her affair with him after details of his illicit relationship with a second woman came to light.

So it would seem that the headline in the Daily Telegraph of 8 March that some Scottish priests under O'Brien's watch were'out of control sexually' would appear to be beyond challenge.

Another inconvenient truth for the Scottish Church is that you can have as many guidelines and policies as you want, but if bishops refuse to implement them, they are worthless. With the publication of the Nolan report in 2001, the Church boasted that its 1999 actions had preceded Nolan by two years, and claimed that "there is much sharing of information, expertise and resources among the eight Scottish Dioceses. There is also liaison between the Catholic and Reformed Churches in Scotland and a developing relationship with other Churches in Britain and Ireland."

Was the Diocese of Cloyne in Ireland one of those with which this liaison occurred? For nowhere was the gulf between having procedures and actually putting them into practice more evident than in the case of Bishop John Magee in the Irish Diocese of Cloyne. Magee's failures led to the Irish Government's report revealing that the Vatican considered the Irish bishops' child protection policies and guidelines to be a 'study document', not a definitive set of instructions and rules. This in turn led to the Irish Taoiseach Enda Kenny's devastating speech in the Irish Parliament in 2011, when among other stinging criticisms of the Irish Catholic Church he noted the Cloyne report told "a tale of a frankly brazen disregard for protecting children," and this even after formal procedures had been put in place and reassuring noises as to future full compliance had been made.

Now it seems that a similar tale of guidelines and procedures being ignored has been the case in Scotland under His Eminence Cardinal O'Brien's tenure. In 2004, five years after the introduction of child protection guidelines and seven years after the initial investigative report, the director of child protection for the Catholic Church in Scotland found the system in disarray.

In a detailed report on Scotland's eight dioceses, carried out between December 2003 and March 2004, she found out that problem priests were inadequately supervised and potentially dangerous to children and young adults. The report, entitled A Review of Child Protection Practices, referred to the Church's 'secret archives' and stated: "There is no consistent system of monitoring clergy who present, or may present, a risk to children. Active cases requiring some further action indicate that unacceptable levels of risk to children may have been and could remain present."

She resigned after just four months, shortly after delivering her report to the Bishops. Further allegations of abuse are now appearing as more victims realise that they were not alone in being abused by Catholic clergy, nor alone in having their initial complaints summarily dismissed. As Cardinal O'Brien is alleged to have told one complainant at the time of his abuse by the notorious Father Lynagh, "you are just another abused child, no-one will believe you." But times change.

Earlier this month, Lord McConnell, Scotland's former First Minister, told of his regret that almost ten years on since he made a landmark apology to historic child abuse victims of the Catholic order the Sisters of Nazareth, the victims had yet to see redress. In an interview with BBC Scotland, Lord McConnell said there had been "absolutely no progress" on compensation for victims, and called on the Scottish Government to "do the right thing".

As we await the inevitable media-inspired 'Popefest' this week from the Vatican, we wonder if the new Bishop of Rome will adopt a fresh approach to these issues and take on the Herculean task of cleansing the Catholic equivalent of the Augean stables. We wonder if the Church, whether globally or locally in Scotland, will at last grasp the full meaning of the words transparency and accountability. We wonder too if the Scottish Government will front up to the challenge of announcing a full inquiry of the sort announced last year by Australian Prime Minister Julia Gillard.

Don't anyone hold their breath.