The Catholic Church must change or die 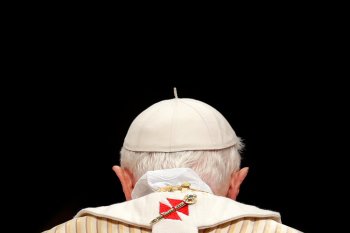 The Catholic Church is in crisis, and not a moment before time. The level of arrogant politicisation to which it aspired under the papacy of Joseph Ratzinger was appalling.

Not that such interference in secular politics has stopped. Only this week we read that the Catholic bishops in Northern Ireland are rushing to support new restrictions on abortion in the province, where the law is already severe by most European standards. And in thePhilippines a huge tarpaulin has been erected over the front of a cathedral naming politicians who didn't vote in the way the Church wanted them to, and advising worshippers in turn not to vote for them in elections.

Now Cardinal Keith O'Brien,Britain's most senior Catholic cleric and one of the most prominent opponents of same-sex marriage, has been brought low over "inappropriate behaviour". His own cruel and overblown rhetoric is now catching up with him and intensifying his humiliation. The hatred that he heaped on the gay community because it dared to aspire to equality turns out to have been just a cover for his own, unresisted, sexual impulses.

So what will the Catholic Church do now? Will the new pope see sense and accept that the world has moved on and that his Church must move on too, if it is to retain any relevance. Will he accept that many of its teachings are impractical, unheeded and despised?

Or will he be another traditionalist who insists on "eternal, unchangeable truths" that originated some time in the 13th century?

The Catholic magazine The Tablet is generally thought to be on the liberal end of the spectrum and therefore comes in for almost as much stick as the church's more forthright secular critics.

In its current edition is an editorial suggesting that it is time for the Church to end the increasingly futile war with homosexuals. "There is no more mileage in this issue for the Catholic Church, and the sensible course would be to put it on the backburner with the heat turned low – to make peace with the gay world and move on."

This sounds like good advice. The Church is on a hiding to nothing with this policy. In the United States, the president has filed an amicus brief with the Supreme Court arguing that same-sex marriage is a human right that must not be denied. The Catholic bishops have lost their battle to derail this plan, but they won't shut up.

Not only will the Church not win this war, it will create the perception of a cruel, inhumane institution that will not see what most other people have seen long ago.

It might also consider toning down its other foolish teachings.

Clerical celibacy not only creates agony for the people who embrace it, it also creates problems for those who fall victim when priests are unable to damp down sexual impulses which become twisted and dangerous.

In its intractable opposition to abortion (or "massacres" on a par with the holocaust or Dunblane, as the good Cardinal would have it), the Church has created a monstrous industry that forces rape victims to bear the children of their violators and it denies abortion to women whose own lives are at risk from dangerous pregnancies. But even more than this, it ensures that women who live in unimaginable poverty must endlessly produce more children than they are capable of feeding.

In any case, women should be the arbiters of their own fertility. They should be the ones who decide whether their pregnancy should continue. Not a priest, nor a pope.

The Church opposes scientific progress in stem cell research (or "Nazi-style experiments" as Cardinal O'Brien labelled it), research that could relieve unendurable suffering and save lives. It opposes assisted suicide, even though society has long since realised that prolonging the incurable suffering of loved ones for no good reason is cruel and pointless. Sex education for children is regarded as "state-sponsored sex abuse".

If the Catholic Church stopped its agitation on these social issues (which should be settled by democratic means, anyway, and not by holy writ) it could divert its considerable energies and resources into the real social problems that dog society.

The treatment of the elderly, the relief of poverty, the eradication of disease.

The Catholic Church would argue that it is already prominent in all these areas, which is true. There are Catholic relief agencies around the world doing excellent work, but sometimes they are hamstrung by the Vatican's obdurate restrictions on condoms or abortion.

And sometimes, when there is no restraint, the Catholic approach to "welfare" becomes brutish and cruel as with the Magdalene Laundries and numerous children's homes now being exposed as dens of abuse.

The good work that the Church does fades in the public mind as it sees the attempts to avoid compensating victims of abusive priests, and still covering up vile crimes despite promises to be "transparent".

It seems almost every day a new scandal arises somewhere in the world in which the institution of the Church has been caught trying to conceal misdemeanours – some of which beggar the imagination in their depravity.

Regrettably, we don't hold out much hope for change in the short term. But the continuing decline of support in the pews may bring the Church to its senses.

It is a pragmatic institution that does what it needs to do to survive, as we have seen over the past two thousand years. And if it sees a threat to its power or its finances, it will take whatever action is necessary to preserve them.