Will the new Archbishop’s evangelical fervour aid destruction of the welfare state? 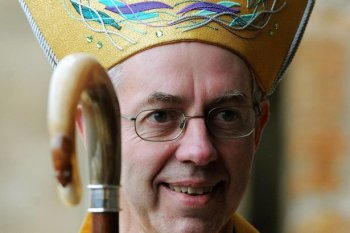 Justin Welby, the new Archbishop of Canterbury is a self-confessed "evangelical". We can, therefore, of course, expect a lot more evangelising from him than from his predecessor, who seemed more interested in abstruse theological meandering than engaging with the real world.

Dr Welby is searching for a role for his Church in the face of its increasing irrelevance. He doesn't just want to manage its decline, he wants to revive it.

He thinks that "faith-based welfare" is the answer. In a speech to an evangelical audience in Nottingham in January when he was still the Bishop of Durham, Dr Welby said the Church faced its "greatest moment of opportunity since the Second World War". He said Christians shouldn't be afraid to talk openly about their faith and "grasp the opportunity" presented by an expanding social role, through running schools and initiatives such as food banks, to spread the Christian message.

He told congregants at the Trent Vineyard church that while the economic downturn had a devastating effect, it could also open the way for social change.

"In 2008 we had the most significant financial collapse in this country, in terms of the banking system, since the mid-19th century. One of the reasons the recession has been so deep and may be going into a triple dip is because there has been such a loss of confidence.

"But the side effect of that has been that the state has run out of the capacity to do the things it had taken over since 1945. All the idols on which our society was based have fallen, they have been toppled. They have been toppled by the financial crisis, by scandal. Trust has broken down."

He said the "idols" included materialism and the belief in the economy's capacity to continue growing, adding: "And the state as security can no longer provide what it [could].

"I grew up in a country in which the idea of a food bank was something you had in theUnited States of America, we didn't have any. There are 50... in my diocese alone today. These are things that we never imagined because if you ran out of money the state cared for you."

He suggested that the state could no longer "replace" the Church in carrying out "works of mercy".

"We are educating, in my diocese, 50,000 children. In the country as a whole the Church of England alone educates a million children every day," he said.

"Are we going to take the opportunities that are there for the grasping to bring people to know and love Jesus Christ?"

And to back up the Archbishop's words, the Church Urban Fund has produced a report saying how much social input the church is providing.

About 54% of Church of England parishes run at least one organised activity to address a specific social need in their area, and many organise several. Activities range from parent and toddler clubs to highly specialised debt or stress counselling, community cafés and food, clothes or furniture banks.

More than one in 10 said they run street "patrols" providing blankets and food to homeless people or simply helping drunk people get home safely.

Paul Hackwood, chair of trustees, said: "All over the country, churches are working to transform their communities, providing food banks, drop in centres and youth projects. The recession has led to unemployment and benefit cuts, which are having a really negative effect on people's lives. "It has often left to communities themselves to come together and fill the gap."

It is laudable that the Churchess are doing their bit to help people survive this downturn in the nation's economic fortunes.

But Britain is still one of the richest nations in the world and there is no excuse to withdraw basic state welfare services.

Archbishop Welby's comments smack of unpleasant opportunism. Instead of seeking to make people dependent on the whims and vagaries of charity and volunteerism, he should be using his political clout to press for the retention of state-run welfare services. Instead, in his determination to "bring people to Jesus" he is colluding in the destruction of those services.