There is no American-style Religious Right in Britain, but the general theo-political landscape is lurching rightward 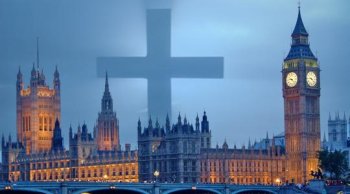 A new report by the Theos think-tank throws some interesting light on the evangelical Christian groups that have pushed themselves to the forefront of religio-political activism in the past couple of decades.

The report entitled "Is there a 'religious Right' emerging in Britain?" is by Andy Walton and looks at groups such as the Christian Institute, Christian Concern, The Evangelical Alliance and CARE.

The conclusion is that there is no "Religious Right" in the American sense in Britain. The evangelical Christian groups in this country have not managed to colonise a major political party to any great extent as they have the Republican Party in the USA. There are religious groups attached to each party but their influence is limited.

Apart from their social conservatism, evangelical religious groups are not all right-wing in other areas, such as in their approach to fiscal policy. Neither do these groups have the same kind of financial clout that their American equivalents have. Although Christian Concern and the Christian Institute both have annual turnovers in excess of £2 million, this pales into insignificance besides the £38,000,000 generated by the Alliance Defence Fund in the USA.

Despite suspicions that they are being bankrolled by American fundamentalists, all these groups deny that they get any significant amounts from these sources. Andrea Minichiello Williams of Christian Concern and Christian Legal Centre says that the Alliance Defence Fund gives her groups "a £1,000 here and a £1,000 there".

She says that they exist on donations from supporters, with occasional cheques for £20,000 to £50,000 landing on her desk.

The report acknowledges that these groups have a "symbiotic relationship" with some elements of the press, a relationship that has inflated their voices and exaggerated their influence. Nevertheless, they make little practical impact in the areas on which they lobby.

They have failed almost completely to make any inroads on the issues on which they campaign. Of the dozens of legal challenges that the Christian Legal Centre and the Christian Institute have launched, only one has been successful and that was the recent decision in the European Court of Human Rights on Nadia Eweida, the BA "cross woman". And even that was decided more on a technicality than by establishing any new precedent. They have spent hundreds of thousands of pounds pursuing these cases all of which seem to be based on wishful thinking, delusion and paranoia.

The decision by these fundamentalist groups to wage war on the equality laws has, so far, been entirely unsuccessful. Every court and tribunal in the land has rejected their argument that Christians are somehow being discriminated against because they are forbidden from infringing the rights of others.

Their arguments that religious discrimination has been perpetrated when crosses were "banned" in the workplace was recognised by courts as entirely fallacious. Crosses were never banned. Occasionally workplace policies required that jewellery not be worn. If this happened to apply to a cross, it was purely coincidental. Presenting these uniform policies and health and safety regulations in court as "religious discrimination" showed that these groups were prepared to use misleading and dishonest tactics to further their cause.

The alliance with newspapers such as the Daily Mail and the Telegraph ensured that the misleading claims were perpetuated to the degree that they eventually became accepted as truth. There is still a widespread perception that crosses are forbidden in the workplace.

Although these legal challenges have almost entirely failed to convince courts, the biased reporting around them has created a distinct narrative of "Christian persecution" that is mostly fabricated.

What the Christian conservative groups have failed to achieve in the courtroom, they have more than succeeded in doing in the realms of propaganda. Their synthetic claims of persecution have brought many Christians into their fold who seem genuinely convinced that either their faith is under attack or that it truly deserves a privileged status in society – even if that status comes at the expense of other people's rights.

So yes, I agree with Theos that there is no American-style Religious Right in this country and that those that want to create one are making little progress.

Another point made in the Theos report is that the presence of an established church acts as a "buffer" to keep such wild and extreme groups away from the centre of power. The state has the dear old mild and moderate Church of England to lean on when religion and politics collide.

This is self-serving nonsense. The truth is that religious groups in this country do not have a significant constituency any more. The idea that if the Church of England were to be disestablished, we would immediately run into the arms of crackpots like Christian Concern who would step forward to "fill the vacuum" is utterly unconvincing.

Firstly, the Church of England is not so moderate any more and seems to be at constant loggerheads with the Government. The confrontations over gay marriage and women bishops are the latest example.

Secondly, according to the 2009 British Social Attitudes Survey, only 9% of British people with a religious affiliation said religion was "very important" in making decisions on political issues. This hardly indicates that the people of this country are aching for the Church of England to step aside so that they can rush to support parliamentary fundamentalists who want to make abortion illegal and probably contraception, too.

And thirdly, we shouldn't forget that Theos was launched with the sponsorship of the Church of England, so is hardly likely to be an enthusiastic supporter of disestablishment and much more likely to be an apologist for the status quo.

So, there is no Religious Right in Britain, and those who aspire to create one have, so far, failed completely to make much progress.

What we must be aware of, though, is that the mainstream churches that are supposed to protect us from extremism are rapidly becoming extreme themselves. The Catholic Church particularly has been extraordinarily belligerent lately in its attempts to derail democratically agreed progressive legislation. The Anglicans are rapidly catching up with this new politicisation of religion. The new evangelical Archbishop of Canterbury has yet to show us how he will behave in this arena, but what he has said so far isn't promising.

We will watch his progress with great interest.