Is Europe secular or Christian? 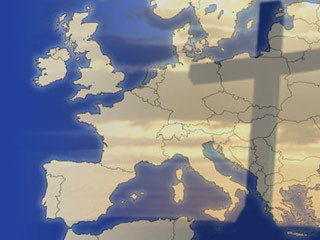 During 2009 and 2010, the Nova Research Centre, Redcliffe College, Gloucester(which I served as founding Director between 2007 and 2011) began to identify ways of measuring secularity across Europe. We selected six items from the European Values Survey (first conducted in 1980 and repeated in 1989, 1999 and 2008). The items selected included responses to these questions:

Responses are available from between 1,000 to 2,000 people for each of the 47 countries surveyed. The scope of the questions provides a high level of confidence that this can be considered a comprehensive measure of secularity across Europe. A summary version of these responses enabled us to construct a 'Nova Index of Secularity in Europe' (or NISE!).

It was also important for us to be able to make crucial distinctions between the way that we were using various closely related terms. We took the view that we should distinguish between the philosophy or ideology (secularism), its associated socio-cultural phenomenon (secularity) and the social conditions (secularization) that are the result of constant and consistent secular policies and politics. Our primary interest would be in trying to illustrate the varying levels of secularity across Europe.

It's certainly true that the historical development of ideological and philosophical secularism in Europe has been welcomed by relatively few of its theologians and Christian leaders. Many tend to see it as the antithesis, even corrosive, of historic Christian faith. It was the case that a number of western theologians in the 1960s and 1970s accepted the view that the shifting social context pointed to a secular future and attempted to reframe an understanding of Christian faith and theology accordingly. So, John Robinson's Honest to God (1963), Harvey Cox's The Secular City (1965), and Peter Berger's The Sacred Canopy (1967) each dealt in a similar way with the sense that western Europe was increasingly secular.

Other theologians, including Lesslie Newbigin, attempted to articulate a more critical response (for example, his Honest Religion for Secular Man (1996)) although even Newbigin left unchallenged the basic assumption that secularization was the future of western societies.

Interestingly the missionary engagements of faith with the futures of secularism was a challenge that Newbigin left for others, following his death in 1998. One of the best examples of this has been Andrew Kirk's work, most importantly in his 2007 book The Future of Reason, Science and Faith: Following Modernity and Postmodernity which is a demanding read and probably not recommended for all but the most determined of readers!

From the NISE measures we believe that the 2008 data points to a 'developing post-Christendom identity', characteristic of people who have previously been, or who remain, 'Christian' but who presently have no institutional affiliation (or a very diluted form of it). This is a shift from religiosity towards spirituality, not a shift from non-religiosity towards spirituality. The newly 'spiritual' are not on a journey towards faith but are more likely to be on a journey away from church affiliation. Whether this data represents a deepening of secularity or a mutation of religiosity deserves closer and more rigorous attention and debate.

From the EVS data we have identified a markedly irreligious generation of 50-69 year olds, best characterised as 'ideologically hostile' to religiosity. This generation is now beginning to retire from influential roles in the media, politics, education, and the arts. The havoc that these 'lost generations' have wreaked – in constructing a narrative of hard secularism – may finally be waning. In contrast there is some evidence to suggest that the current generation of 20-29 year olds is less hostile to religion and religiosity, a generation that is best characterised as 'benignly indifferent'. This more 'open generation' may prove to be more amenable to creating the space necessary for a discussion of religion and religiosity within the media, politics, education, and the arts.

Although our use of the EVS data and our summation of it in the NISE tends to obscure national variations across Europe, these nevertheless are a crucial element in representing more accurately the nuances and variances in levels of secularity across Europe. It is probably accurate to describe contemporary Europe as simultaneously experiencing 'pre-secularity', secularity, and 'post-secularity'.

While Europe as a whole may be seen as increasingly secular, there are a surprising number of mentions of God, the church and religion in the constitutions of individual countries. Denmark, Greece, Iceland, Liechtenstein, and Malta all have constitutional state churches, while others such as Sweden, Finland or Spain have formally separated (or are in the process of doing so) although some recognition of the relationships remain. France, Kosovo, and Serbia & Montenegro define themselves as a 'secular state' whereas some countries compromise – for example while Albania has no 'official religion', it references 'faith in God and/or other universal values'. Ireland, the Ukraine and Poland have the most overtly 'Christian' preambles to their constitutions, with mentions of the Trinity (Ireland), and 'our culture rooted in the Christian heritage (Poland).

Our work has added to the debate implied by the question in the title to this brief article. Whilst it points to the widespread impact of secularising policies and programmes, it allows some space for exploring minority reports and resists the prevailing tendency to paint the future as overwhelmingly secular.

The Revd Dr Darrell Jackson was formerly Executive Researcher for the Conference of European Churches, Geneva; Director of the Nova Research Centre, Redclffe College, Gloucester and since 2012 has been the Senior Lecturer in Missiology at Morling College, Sydney, a Recognised Training Institute of Melbourne University of Divinity. He can be contacted at darrellj@morling.edu.au