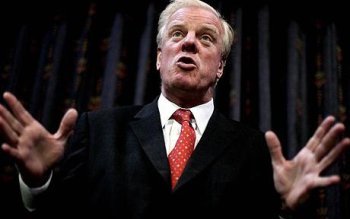 A ten-minute rule Bill — the Equality (Marriage) (Amendment) Bill — was introduced in the House of Commons on 29 January 2013. Its aim is to amend the Equality Act to add "conscientious beliefs about the definition of marriage" as a protected characteristic alongside disability, sex, and sexual orientation etc.

Such an amendment is unnecessary and could even shield religious extremists from appropriate sanctions.

The backer of the Bill is Edward Leigh, the socially (very) conservative MP who is a frequent promoter of religious causes. He has become exercised about the case of Adrian Smith of Manchester's Trafford Housing Trust. Mr Smith was demoted, and his salary reduced by 40%, after he had asserted on his personal Facebook page that gay couples marrying in church was a "an equality too far".

The National Secular Society supported Mr Smith's right to freedom of expression and the High Court ruled against the Trust and in favour of Mr Smith. For practical reasons he could not be reinstated in his old job, and I admit that the damages awarded to him by the Court were — for whatever reason — token.

The legal change Mr Leigh's Bill proposes, however, is totally over the top and unnecessary. There are plenty of areas of contention in the workplace already, such as politics, religion and views on sexual matters, but only a minuscule number end up in legal wrangles such as that experienced by Adrian Smith.

I assume Mr Leigh's amendment is intended to be biased in one direction: "conscientious" seems to be code for "objection on grounds of religious conscience". Were the amendment to succeed, and it be interpreted in that way, it would privilege religious conscience in law on this topic but not any conviction felt by the non-religious.

Mr Leigh seemed to suggest non-believers need no more protection: "For over a century, atheist teachers have been allowed to express their opinions and no one can force them to teach religion," he asserted.

As to forcing atheists "to teach religion" Mr Leigh is only partially correct. In community schools, the the law protects teachers from being forced to teach religion/RE. But the number of such schools is shrinking. In the rapidly growing number of academies, however, statutory protection is not afforded – despite NSS protestations.

And the extent to which atheist teachers are allowed to express their opinions is, I suspect, severely limited in the many publicly-funded religious schools in the country, often the only ones within easy reach in rural areas.

For example, in 2003, the Vatican (through its Congregation for the Doctrine of the Faith) issued guidelines stating that "respect for homosexual persons cannot lead in any way to approval of homosexual behaviour or to legal recognition of homosexual unions", and presumably that applies to (publicly funded) Catholic schools, many of whose teachers are non-practising or non-Catholics.

If there were to be a provision about protection of those expressing biased views on marriage — which I oppose — there would be more justification for it to be in the opposite direction – to give protection to those opposing the limiting of marriage to opposite sex couples.

Do we really want employees to be able to tell their colleagues, or indeed teachers tell pupils, that homosexuality is an abomination in the eyes of the Lord, that homosexuals are intrinsically disordered and that all those giving physical expression to their orientation will rot in hell? I fear that if Mr Leigh's amendment were to succeed, there is a danger the law would become a carte blanche for those teachers expressing such extremist views.

The motion to bring in the Bill was passed by 86 votes to 31, and the second reading will be on 1 March. Stephen Doughty (Cardiff South and Penarth), who put on record his Christian credentials, spoke in opposition and said the Bill would never make the statute book – and this seems to be the common view.