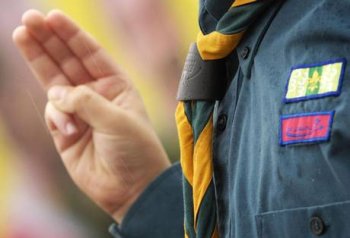 Despite describing themselves as "open and inclusive" organisations, both the Scouts and the Girl Guides currently insist that new members take a 'Promise' that includes a religious oath. However, this could all be about to change.

The Scouts have launched a consultation to ask their members, and the wider public, whether an alternative non-religious version of the Promise should be developed for those who feel unable to make the existing commitment.

The Girl Guides have also launched a consultation to discuss the wording of their Promise. This consultation is also open to the general public and they're particularly keen to hear from parents, potential members, volunteers and supporters.

We have longed campaigned for an end to the exclusion of the non-religious in the Scouts and Girl Guides. Most recently, in November 2012, we launched a petition calling on the UK Scout Association to open up Scouting to all. We also wrote to Girlguiding UK (pdf) asking them to do the same. Finally, it appears public pressure is paying off.

The Scout Promise requires scouts to "to do my duty by God". The Girl Guides promise includes the line "to love my God". We argue that the current wording acts as a religious barrier to full membership to a significant proportion of young people – and potential volunteers.

The Scout Association and the Girl Guides, which are not religious organisations, have made efforts to accommodate followers of many different religions, and we argue that they should now do the same to welcome people of no religion.

If you agree that the Scouts and the Girl Guides should be welcoming to non-religious — and not expect young people to lie about their beliefs in order to join — please take part in these important surveys. With your help, 2013 could be the year that our campaign to make the Scouts and Guides more inclusive finally succeeds.

The Guides consultation will remain open until Sunday 3 March 2013.