Stonewall is right – the Cardinal is a bigot 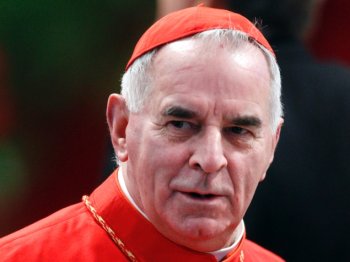 The LGBT rights group Stonewall is under mounting attack for nominating Cardinal Keith O'Brien as "Bigot of the Year" at its awards ceremony this week.

Politicians – such as Alec Salmond – who are petrified of upsetting the church lest it ends up costing votes, are rushing to his defence.

And, once again, the aggressive Catholic Church is playing its age old trick of turning the tables on its critics and making itself into the victim. It's a familiar technique which we've seen deployed repeatedly in the clerical child abuse scandal.

When the Church has been found out not only to be enabling paedophiles within its ranks, but then concealing their activities from the authorities, it has constantly tried to shift the blame on to someone or something else. The Church has nominated a whole raft of villains as culpable for its crimes: an American problem, irresponsible permissiveness, then it was the gay community, then it was unfair reporters – and even "secular values". All have been made whipping boys by the Vatican.

When Cardinal Cormac Murphy O'Connor was found to have covered the tracks of a notorious child abuser in his Arundel diocese, all investigations suddenly ceased when he claimed that he was being victimised by the media.

Now we have Cardinal Keith O'Brien, who has said some vile and hate-mongering things about gay people, all but dehumanising them by referring to paedophilia and bestiality, being portrayed as a victim of wicked gays because they dared to speak back to him.

But Stonewall is absolutely right. The Cardinal is a bigot, and the award was appropriate and well-deserved.

The Church, after all, is trying to deny gay people their human rights. And it seems it will stop at no dirty trick to achieve its goal.

We say, lay off Stonewall and turn a more realistic spotlight on the scheming and conniving of a highly politicised Catholic Church. We hope that Barclays and Coutts will not reward the Cardinal's dehumanisation of this oppressed minority and add to it by withholding their generous funding.