Mr Cameron, the Big Society and the fundamentalists 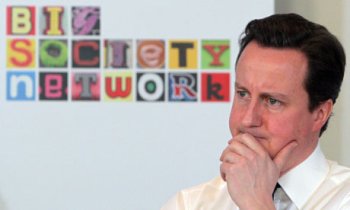 Prime Minister David Cameron last week attempted to revive the idea of the Big Society – in which charities and religious organisations run public services – at a reception at 10 Downing Street for the Council of Christians and Jews.

Mr Cameron said: "There is hope for the future, particularly if people can follow the example of charities like your own. This government is trying to put charities, charitable groups, and charitable giving on a whole different footing. Right across the board you can see that we are saying you're not the third sector – we believe charities have a huge role in delivering great public services.

"It's what I call the Big Society – the idea that there's a huge space between government and the individual that can be filled by organisations, faith-based organisations perhaps in particular, that can deliver great public services, that can do great things in terms of tackling some of the problems of our time."

Perhaps the Prime Minister doesn't read Private Eye, but in this week's issue he could have seen the report below, which illustrates just how undesirable it would be to hand out public money to religious groups without strong controls in place:

A year ago we reported concerns from Carmarthenshire about the council's close links with an evangelical church associated with the US Christian fundamentalist Mercy Missions, which runs homes where emotionally disturbed young women are "treated" with techniques such as intensive Bible study and the casting out of demons. Two homes in Australia were closed in 2008 after the Sydney Morning Herald exposed their "emotionally cruel and medically unproven techniques".

Now more details have emerged of the Towy Community Church's ambitious plan for a community centre in Carmarthen, which will be built with the aid of £1.4 million of public money from the council, the Welsh Government and the National Lottery. The complex, featuring a bowling alley, auditorium, conference centre and community cafe, will also feature a debt counselling service. Welcome news in an area where the council has just taken away £32,000 funding from the Citizens Advice Bureau.

Yet help with keeping the bailiffs at bay comes with a catch: clients of the advice service will be "invited to pray" with their counsellors. And if the hard-up folk refuse to go down on their knees? The Towy church states that those who reject Christ face "eternal conscious punishment". Can't say they weren't warned.