An important lesson that politicians can learn from the American election 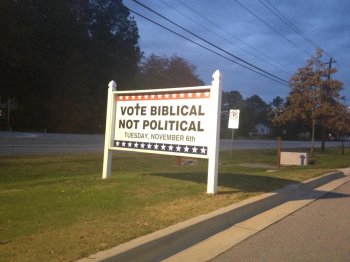 "The Religious Right is dead" announced the Daily Telegraph on Wednesday morning after the defeat of the Republican Party in the US election.

The headline was over a blog by the paper's rather wacky blogs editor Damian Thompson, but Mr Thompson seems to be first to have acknowledged that for all the hype about the power and influence of America's religious conservatives, in the end they failed dismally to swing the election.

And this should give a message to all politicians in the West who imagine that there is some kind of all-powerful "faith constituency" that can be delivered at the polling booths by the arrogant and demanding "faith leaders". The German Chancellor Angela Merkel is the latest to fall into this trap, trying to court religion by telling churches that she doesn't support strict separation of religion from the state. Mitt Romney's experience should tell her that there is little value in pursuing that line – it alienates as many as it impresses.

The US election shows once and for all that there are at least as many liberal, good-hearted people in the world as there are hate-filled, small-minded religious bigots.

And so the Catholic Church — which has become much more overtly political over the past few years — has failed dismally to push its adherents behind Mitt Romney. The angry, spiteful rhetoric that informs the Catholic bishops' campaigns against abortion, contraception and gay rights repels the people it is supposed to influence. The Church hierarchy will eventually have to come to terms with that, and if they want the Church to have influence in the world, they will have to cool it and urgently re-examine their unpopular, outmoded ideas.

As Dominic Holden wrote in Salon: "The Catholic laity's 77 million members — who represent the largest religious denomination in the U.S. — largely support civil marriage for gay partners. A Public Religion Research Institute poll conducted last year found that 71 percent of American Catholics support marriage rights for same-sex couples when they are assured that it's marriage "like you get at City Hall." Nonetheless, in all four states, where polls show voters supporting gay marriage by narrow margins, the Catholic hierarchy is helping lead the opposition to marriage equality."

It seems these 77 million people are not Catholics when they get to the polling station – they are US citizens. And that was proved by the fact that in the four states that had gay marriage as an issue on the voting paper, all four voted to support reform.

If this election has told politicians one thing, it should be that they should listen to the voters and not to the religious lobbyists who are trying to write their doctrines into law.

Because when the curtain is pulled back — as it has been at this election — you will not find the awesome, vengeful religious voting bloc that was promised, but just a collection of wizened old men with a media megaphone that makes them seem much bigger than they really are.