Time to rethink the Church's role in state education 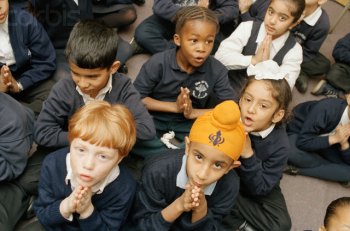 It's the same every year. No sooner have kids gone back to school than we notice a spike in calls to the office from parents concerned about the amount of religion being forced down their children's throats. This year it appears to be on the increase.

In March, the Church of England published its Church School of the Future (pdf) report. The report made clear the Church's intention to intensify the religious input into lessons. Schools, said the report, "must include a wholehearted commitment to putting faith and spiritual development at the heart of the curriculum and ensuring that the Christian ethos permeates the whole educational experience."

From the evidence of calls to the NSS over the last few weeks, it appears head teachers are wasting little time in putting the church's plan into action.

Reports have been coming in of head teachers setting up 'faith zones' and 'worship corners' in every classroom, with pupils press-ganged into writing prayers. At one school the 'good school citizen award' has been renamed the 'good Christian award'. Some schools have introduced a 'Lord's Prayer day', with an entire day spent on activities related to it. Another exasperated parent contacted us after finding out their child's school is conducting 45 minutes of worship each and every day. That means some pupils are spending more time worshipping than the average churchgoer!

All state funded schools in England and Wales are still required by law to provide a daily act of worship. Some schools flout this law, instead holding inclusive assemblies, relevant to all pupils, in which religion plays no part. However, many schools, particularly faith schools, use the opportunity of assemblies to push the faith of the governing body onto their pupils.

All parents – including in 'faith' schools – have the legal right to withdraw their children from acts of worship and RE, without needing to give any reason. But when parents try to exercise their legal right, many are finding that pious head teachers take exception, and a number of parents contacting the NSS have told us that head teachers, instead of honouring their legal obligations, curtly suggest another school may be more appropriate for their child. One academy principal even threatened a pupil with expulsion after a request was made to withdraw from worship. At another church school, the headmistress's recent welcome speech to parents included the notation that "we are a Christian school and we do say prayers and go to church and if you don't believe in that you are going to find it rather difficult". So much for the Church of England boast that their schools are "inclusive" and "serve all equally".

One school that did allow a parent to withdraw their child insisted that the pupil spend worship time sitting in the corridor outside the secretary's office. To the nine year old girl in question, this felt like punishment – and it probably was. It certainly encouraged bullying from other children, who called her "naughty" and wanted to know what she'd done wrong. Thankfully, after taking advice from the NSS, that particular pupil can now spend worship time studying in the library. Others may not be so fortunate.

Christian parents have a right to educate their children in conformity with their own religions and philosophical convictions. But that right also applies to non-religious parents and parents of other faiths. It would be wise therefore, in a diverse society such as ours, for publicly-funded education to be delivered within a secular framework in order to be fair to everyone. After all, most parents don't send their children to schools – even 'faith' schools – to be inducted into a particular religion; they send them there in the hope of a good education.

It is therefore perfectly understandable that parents opt to send their children to their nearest school – be it a community or church school. But of course, they might not always get in. Many state funded 'faith' schools are allowed to prioritise children on the basis of their parent's faith, but in reality, a great number of church schools provide education for children from other faith and non-religious backgrounds. It is wrong therefore, for such schools to assume Christianity of their pupils. Yet so often, church schools carry on as if the inculcation of every single pupil into the faith is as important as teaching maths. We have to fight this culture.

Christian churches were the first to provide mass education in England and Wales. For that we must be grateful. We should also acknowledge that the Church of England has a long history of involvement in education and schooling.

But it was often the public and benefactors rather than the church that paid for the schools to be built, and there are instances of the Church of England objecting to publicly funded community schools, worried that they would diminish the Church's influence on the nation's youth. Let's not forget, the Church of England's "The National Society for Promoting Religious Education" used to be called "'The National Society for the Promotion of the Education of the Poor in the Principles of the Established Church".

But all that was then and this is now. Britain has changed. In a nation so religiously unconcerned, it makes little sense for the Church to be so dominant in our public education system. It's madness that worship in schools is mandatory by law. It is also unacceptable that religious schools are granted exemptions from equality legislation permitting them to discriminate in pupil admissions and in the employment of teachers. It's time politicians stood up to the Church and instead of talking about "long standing traditions", started to recognise the reality of modern Britain.

Our state education offering simply fails to reflect the fact that our society is becoming increasingly diverse and increasingly secular in its outlook. But in fact, the increasing number of State-funded religious schools means we're heading in diametrically the opposite direction. The multicultural response, to open up more minority faith schools, or atheist schools perhaps, can only lead to greater segregation and division. Sectarian schooling in Northern Ireland and Scotland is proof, if any were needed, that segregation in education is a bad idea.

A secular approach to education would see young people educated together in an inclusive, respectful and religiously neutral environment; one that develops the relevant skills of analysis and reasoning in order for young people to make a fully-informed choice about the value system by which they choose to live. Regardless of their religious beliefs, isn't that a vision that most parents could subscribe to?