Religion is shrinking: and it only has itself to blame 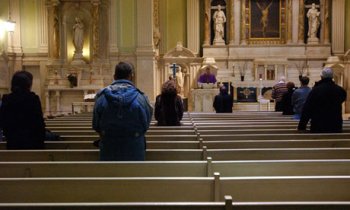 The perception that Americans are an overwhelmingly church-going, evangelically conservative people took another knock this week with the release of a poll from the Pew Research Centre.

It showed that one-fifth of U.S.adults say they are not part of a traditional religious denomination – but most don't regard themselves as atheists. Many pray, believe in God and have regular spiritual routines. And for the first time, Protestants make up less than half of the population.

The number of those who say they are "nothing in particular" or define themselves as atheist or agnostic has risen since 1990 from 8% to 19.6% according to the study released on Tuesday. The number of self-defined atheists and agnostics is rising slowly, but still only represents a small minority (less than 2%).

One-third of adults under 30 say the same. Pew offered people a list of more than a dozen possible affiliations, including "Protestant," "Catholic," "something else" and "nothing in particular."

The nones are strongly liberal on social issues, including abortion and same-sex marriage, but no different from the religiously affiliated on their preference for a smaller government providing fewer services.

If they have an issue, it's that they don't believe religion and politics should mix. Only a third of them say it matters if the president is a believer. Three-quarters of the religiously affiliated think it matters.

"The continued growth of the religiously unaffiliated is one of several indicators suggesting that the U.S. public gradually may be growing less religious. To be sure, the United States remains a highly religious country – particularly by comparison with other advanced industrial democracies – and some measures of religious commitment in America have held remarkably steady over the years. The number of Americans who currently say religion is very important in their lives (58%), for instance, is little changed since 2007 (61%) and is far higher than in Britain (17%), France (13%), Germany (21%) or Spain (22%). And over the longer term, Pew Research surveys find no change in the percentage of Americans who say that prayer is an important part of their daily life; it is 76% in 2012, the same as it was 25 years ago, in 1987.

But on some other key measures, there is evidence of a gradual decline in religious commitment. In 2003, for instance, 25% of U.S.adults indicated they seldom or never attend religious services. By 2012, that number had risen by 4 points, to 29%."

The beliefs of the unaffiliated aren't easy to characterise, as the Pew poll shows. The 'nones' are far less likely to attend worship services or to say religion is important in their lives. But 68% say they believe in God or a universal spirit, one-fifth say they pray every day and 5% report attending weekly services of some kind.

Commentators speculate whether America is becoming secular in the same way that Europe has done. Some think that it is, while others think that religion in the USA has a long experience of re-inventing itself, and will do so again.

But there is no doubt that religious groups that have wielded political power with such arrogance in recent years will have to stop and think about their tactics.

It is clear that intolerant, condemnatory religion puts people off. Catholicism in Europe is dying because of the present Pope's authoritarian demeanour. Each time he offers another insult to gay people or to women and each time he issues another proclamation that defies common humanity (no condoms in the fight against AIDS for instance) a few more Catholics simply retire from the church, sickened.

This week the Pope convened a meeting of bishops to discuss the "tsunami of secularism" that is, apparently, killing faith in Europe.

Cardinal Péter Erdõ said it was all the fault of the media. He said:

"In the majority of the continent, there is a spreading of ignorance about the Christian faith… Many of the mass-media broadcast a presentation of the Christian faith and history that is full of lies, misinforming the public as to the content of our faith as well as to what makes up the reality of the Church."

Others said it was because of competing religions or attacks by judges on the "manifestations of faith". None of them have yet ascribed any blame to themselves as enablers of child abuse or interferers in the free choice of women to choose contraception or abortion. They do not yet accept that their repeated attacks on the human rights of gay people are not appreciated by the world at large.

If the Vatican really wants to re-evangelise Europe, it had better start singing a different song to the one composed by Josef Ratzinger.

See also: Pew survey indicates that secularism has a chance to revive in the USA