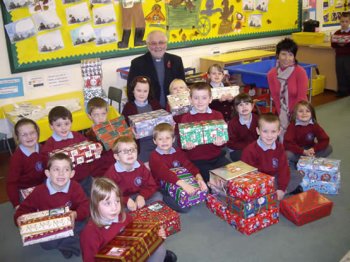 Every year, in the run-up to Christmas, The National Secular Society receives numerous calls from concerned parents about Operation Christmas Child, run by the evangelical Samaritan's Purse organisation. Thousands of churches, schools and businesses across the UK are targeted by this organisation to take part in its evangelical scheme.

I have first-hand experience of this. When my son told me about a scheme at school to send a shoebox of gifts for Christmas to a child in a poor country, I thought it was a nice idea and was glad for him to take part. However, after hearing a rumour at the school gate, I was appalled to learn that the scheme was run by an evangelical Christian organisation which added its own booklet to the gift we had prepared. I felt lied to, as there was no mention of the evangelical nature of the project in the original invitation to take part. Some of us parents spoke to the headteacher and I'm pleased to say the scheme was withdrawn.

If churches choose to send gifts with evangelical strings attached to vulnerable children living in poverty abroad, we might feel uncomfortable about it but it is essentially their business. And if Samaritan's Purse was upfront about the evangelical nature of its work, at least people would be able to make an informed decision about whether to take part. What is really pernicious is the deceit this organisation deploys to involve secular organisations, such as businesses and community schools, in its religious proselytizing.

Samaritan's Purse goes to great lengths to persuade schools of all types that it is in their interests to take part in the scheme by suggesting it might lead to education awards:

"Participating in Operation Christmas Child can help your school fulfil a number of the criteria required for the International Schools Status/Award".

What it fails to explain is that schools taking part are also complicit in the religious conversion of primary aged children abroad, who are led to understand that the gifts they receive are directly linked to participation in Christian activity.

As it explains on the excellent de-bunking website OCC Alert:

"This religious pamphlet [given inside or alongside the shoebox gift] is not just a "booklet of bible stories" but a direct attempt at religious conversion of young children, complete with a "sinner's prayer" of conversion and a pledge card."

"Soon after an Operation Christmas Child (OCC) distribution event, the local church may invite children receiving shoeboxes to participate in a church-run follow-up programme called the The Greatest Journey (TGJ) - giving them the chance to hear more about the Christian faith. What an amazing opportunity to share the Gospel with those yet to hear and respond. In 2010-11 nearly 390,000 children completed the course and 266,000 made a decision to give their lives to Jesus."

However well-meaning supporters of such schemes may be, the schemes are not good value for money, they fail to meet local needs or help solve local problems, and don't support the local economy. OXFAM, DHL, the Inland Revenue and the Co-Op have all withdrawn their support for Operation Christmas Child due to concerns over its evangelising focus. Brendan Paddy of Save the Children, when referring to OCC, said it is dangerous when charities mix humanitarian work with the promotion of a particular religious or political agenda. Even other Christian groups have expressed serious concern.

The National Secular Society urges any supporters who come across this dodgy evangelical scheme – which hopes to send its 100 millionth shoebox this year - to speak to the headteacher at your child's school or the manager of your business, and suggest better alternative schemes, such as: