These imbecilic riots must serve to reinforce our commitment to freedom 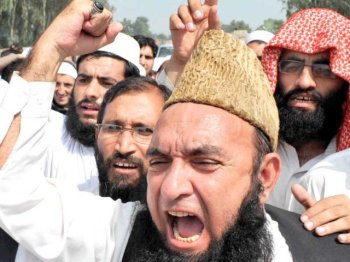 It is estimated that throughout the Muslim world something like ten to twenty thousand people have taken part in the rampages that have dominated the headlines for a week.

That is 20,000 people out of a world Muslim population of a billion.

On the basis of the hysteria of this relatively small but lethal mob there are calls in the West for an international blasphemy law to be introduced by the United Nations.

Because of an imbecilic reaction to an equally imbecilic film, there are some commentators in the West who would, apparently, be prepared to fatally compromise the free speech that underpins our democracy. They would willingly sacrifice our freedom to question religion, a right that only came after long centuries of turmoil.

All to try to appease those who will not be appeased.

The dangerous idea of an internationally applicable law on "defamation of religion" (or critical examination, as some would see it) must be vigorously opposed. It is no surprise that Islamist leaders would try to use these events to push forward the concept of international blasphemy in order to shore up their own authoritarianism.

But it is almost unbelievable that it should be promoted by people who enjoy the benefits of the Western civilisation of which free expression is such an integral part.

The Islamist extremists who are adding fuel to the flames of this idiotic rioting would like the whole world to embrace their way of life. They want us all to join them in the 7th century. They can't bring us there by persuasion, so they resort to bullying and terror, murder and mayhem. We must tell them that, despite it all, we still aren't going to embrace their horrible Wahhabist/Al-Qaeda/Salafist philosophies – in fact, we are going to resist them even more strongly.

At the same time we will stand with those Muslims – the vast majority – who want to live in peace with their neighbours and who are sick of the constant warfare and conflict carried out in the name of their religion. The fanatics really are a minority; we must not lose sight of that fact.

What we must also do – and vigorously – is reinforce our commitment to free speech. We should not make it the scapegoat for "causing" the violence that has, in fact, been undertaken voluntarily by those involved (they could have simply shrugged off the film as the vacuous nonsense that it is). The riots have been manufactured for political purposes and the fools who took part in them are, for the most part, simply ignorant puppets.

The political jockeying in the Middle East must not be the reason to compromise in any way our commitment to the values of democracy and freedom that we enjoy in the West.

And which the majority in the Muslin world would like to enjoy, too.