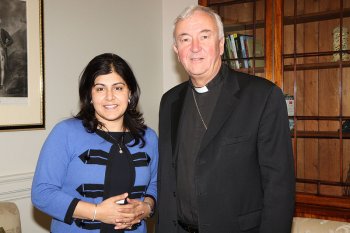 Many will write it off as red meat being thrown to the raving fundamentalists on the back bench of the Tory Party, but the appointment of Baroness Warsi as "Minister for Faith and Communities" is potentially threatening for secularism.

She recently held a meeting with the Catholic Archbishop of Westminster, Vincent Nichols, in which he took the opportunity to repeat to her the patently untrue mantra that "faith plays a central role within society and in building a cohesive society."

"I welcome the government's renewed emphasis on the vital role faith plays in community life and in building a cohesive society," said the Archbishop. "Baroness Warsi has demonstrated strong leadership in promoting good relationships with Religions both domestically and internationally. I look forward to working with her to build on this important work."

Of course Baroness Warsi was more than receptive to this message, being a great fan of propagating it herself.

After the meeting she said: "Ever since I have been in Government I have been making the case for faith and I am delighted to be taking on a dual role in which I can focus on continuing to do so. I will be working closely with religious leaders, and communities of different faiths and none, and I was delighted to see Archbishop Nichols to discuss the opportunities and challenges ahead – particularly on issues of faith and religious freedom."

I'd just like to refer Baroness Warsi to the latest research of people's attitudes to religion and its involvement in politics and policy-making. It gives the lie to this idea that "faith plays a central role within society". It may play a central role in some people's lives, but for most people it is irrelevant and even vaguely threatening.

The sheer arrogance of these "faith leaders" in still assuming that they have a special right to impose their nasty dogmas on an unwilling population is astonishing. It is even more scary that they have champions within the government willing to clear the way for them.

The politicians who are presently angling to get some kind of privilege for religion in government – such as Eric Pickles and Stephen Timms (the Labour Party's so-called "faith envoy") - may be skilled operators in parliament but they become positively ludicrous and unbalanced when they get on their religious bandwagons.

Of course, we've had "faith" departments in government before. They proliferated under Tony Blair's administration. Mostly they were ineffective and, once they'd been announced with great fanfare, largely ignored.

I suspect Baroness Warsi's new job will serve the Conservatives in two ways – it will compensate her for her peremptory sacking as Party Chair and, at the same time, give reassurance to the increasingly bossy and demanding "faith leaders" with whom the government seems to be at constant loggerheads.