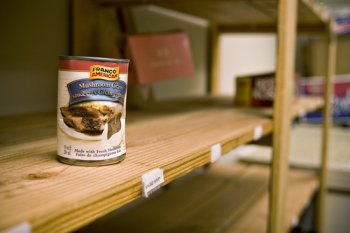 Cuts next year to the social fund, which provides emergency aid to vulnerable people, mean that from April 2013 many local authorities will no longer be able to provide cash help to applicants. The government spent £230m on crisis loans in 2009-10. Under the Welfare Reform Act, administration of Social Fund crisis loans will be devolved to local councils who will share a budget set at 2005 levels. That money will not be ringfenced so that councils can spend it on other services. So, when the fund becomes devolved to local authorities, some plan to refer clients to food banks. As most food banks in the UK are hosted by churches, this is likely to herald a significant increase in faith-based welfare as the Government delegates its responsibilities to charities in the name of the Prime Minister's Big Society agenda.

Food banks are franchises based on the Trussell Trust model of offering emergency food parcels to Britain's poorest families struggling to put a meal on the table. The Trussell Trust charity is Britain's biggest food-bank network and describes itself as a Christian organisation motivated by Jesus' teaching on poverty and injustice: "We believe in turning faith into practical action, living out God's love for the poor."

It's hard to argue with such noble intentions. We all want to make sure hungry people get fed. But here in one of the most secularised countries in the world, isn't the welfare state the best and most dignified way of achieving this?

The Hannah Lambie Report, Exploring the Growth of Foodbanks Across the UK (pdf), published by the University of Coventry, makes for interesting reading. Although a sympathetic report made with the approval of the Trussell Trust, it makes clear that the social injustice of having to go to a charitable food project is keenly felt by food bank clients. Just one page of the report deals with the experiences of users of the service; they are all adverse. Visiting a food bank is described as a "humiliating and degrading experience" and "like begging". As one drug worker tells his clients: "beggars can't be choosers mate". Indeed they can't, but such negative responses to being forced to turn to charity are inevitable, and as the Lambie report rightly points out, the associated feelings of social injustice are largely outside the scope of food banks to alleviate.

The volunteers in the churches carrying out the work undoubtedly carry out their work with the best of intentions, but the fact is that many people using their service will not share their faith. Receiving such assistance in a religious environment makes it feel much more like charity than basic state support, and for some this will understandably bring a degree of unease.

The Lambie Report raises concerns about how inclusive food banks with a specific Christian focus and ethos can be. It also questions the potential applicability of food banks to people of other faiths. As one case study participant observed, from conversations with people from their local Muslim community, "they tend to feel that if there's a problem within the Muslim community, the Muslim community handle it". Of course, the multicultural approach would be to open up Muslim food banks, Hindu food banks or Humanist food banks perhaps, but do we really want to segment and religionise our public services in this way?

A recent Guardian investigation into the unprecedented rise in food banks found no active proselytising going on, but found the food bank recipients were made to sit in the lobby of the church for around 20 minutes waiting for their food parcels. Church staff said that bringing them into the building gets them "curious" and may indirectly encourage attendance. Against a backdrop of almost a century of decline in church attendance, it's not hard to understand why the church sees feeding people let down by the state as a way of finding its relevance again.

But it's not only the non-religious who are wary of faith groups offering themselves up to become an arm of the Government, assisting them in their mission to promote the Big Society by reducing the size and scope of the welfare state. Simon Barrow, co-director of the religion and society think-tank Ekklesia has said: "In the head-rush of 'Big Society' rhetoric, church groups are in danger of being flattered into a position where they may be used to paper over serious cracks in public service provision." He rightly warns that equality of provision and fair treatment should not be relegated to secondary or dispensable matters, by churches or by government.

The Labour Party's 'Faith Envoy' Stephen Timms MP, shadow Work and Pensions secretary and dedicated Christian, says it is a "pretty worrying reflection of what's going on in the country, when people are dependent on these charitable handouts." He too argues it shouldn't be happening on the scale that it is now happening.

As far as I'm aware, food banks, including those operated by the Trussell Trust, provide a helping hand to people regardless of backgrounds or beliefs. But as local authorities start to invest in food banks there is a risk that we'll see the entrenchment of religious discrimination in the delivery of publicly funded services. Wide exceptions in the Equality Act permit discrimination by religious organisations, even when they are working under contract to provide public services.

The position of Food Bank Network Manager currently being advertised (pdf) on the Trussell Trust website states applicants must agree and support the Trust's Christian values and possess a sound understanding and experience of engagement with churches and Christians of all denominations. That doesn't make the job exclusively open to Christians, but it probably tilts the balance very much in their favour.

No doubt some faith-based groups are more than capable of providing services without proselytising, discriminating or imposing their particular religious values. But it's essential that vital public services are provided in a secular context to ensure that no vulnerable people are put off seeking the help they desperately need out of unease about the faith-based agenda of those providing the service. And until some kind of statutory safeguards are in place to protect all potential clients, no local authority should even be considering contracting out essential services to religious organisations.

In the seventh richest country in the world, a welfare state with integrity would not force desperate people to turn to the church in their hour of need.

The National Secular Society has written to Steve Webb MP, Minister of State to the Department for Work and Pensions, seeking statutory safeguards to ensure that food banks and other similar services contracted by local authorities, will not be permitted to discriminate in service delivery or in employment.