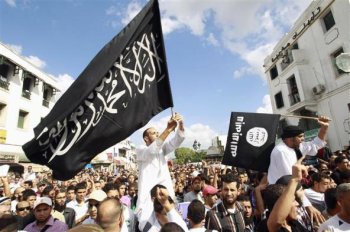 In Tunisia, for instance, the ruling Islamist party Ennahda this week proposed a bill in parliament that would prohibit 'blasphemy'.

Ennahda is routinely described as "moderate" in the Western press and, by the standards of some Islamist movements, it is. But by the standards of Western democracies it is ultra-conservative with a scary agenda that many suspect is not yet on the table.

The new blasphemy bill provides for a prison sentence of up to two years, or four years for repeat offences. The bill, that was filed on Wednesday, draws up a list of subjects held sacred in the three Abrahamic religions, including God and the Prophet Mohammed, the earlier prophets, the holy books, mosques, churches and synagogues.

It also codifies the levels of offence to religious feeling in Islam, Christianity and Judaism, including "insults, profanity, derision and representation of Allah and Mohammed," something forbidden in Islam.

As we've seen in other parts of the Muslim world, blasphemy laws are a very handy way of settling disputes that are nothing to do with religion and sometimes used to persecute and intimidate religious minorities.

They can also be used to silence political dissidents and opponents, and give carte blanche for fanatics to engage in mob violence and lethal vigilantism.

Once an accusation of blasphemy is made, there is little that one can do to defend oneself. It is rather like the old witch trials, where women accused of witchcraft were immersed in a pond for several minutes. If they drowned, they were adjudged innocent. If they survived, it was obviously the devil's work and so they were guilty and hanged. It is a no-win situation for the accused.

The enthusiasm for anti-blasphemy laws in Islamic countries is an indication that no deviation from religious orthodoxy will be tolerated. It hands huge amounts of power to the religious authorities and with a depressing inevitability, very soon a full-blown theocracy follows.

This is the route being taken by the Arab nations who started out with high hopes of a continuing democracy and increased personal freedom.

They are rapidly learning that all too often Islam does not like sharing power with democracy and they will find that their human rights will disappear one by one – starting with free speech. And many seem happy to go along with this when they get to the ballot box – using democracy to destroy democracy.

And in Turkey, which is often flagged up as a perfect example of how Islam and democracy can co-exist, we see in action this step-by-step imposition of authoritarian Islam into law and culture.

All the while, the Islamist Justice and Development Party, led by religious zealot Recep Tayyip Erdogan, makes soothing noises to the West as it quietly implements its real agenda. And the West seems happy to accept all the reassurances at face value.

Meanwhile, by a gradual process, Turkey is being handed over to the Islamists who will soon seek to reinforce their power by gently, bit-by-bit — and with lots of insistence from Mr Erdogan that it is not really happening — also dismantling the democratic process that brought them to power.

This was comprehensively explored in The Atlantic magazine (Islamism and authoritarianism in Turkey) and reinforced after women took to the streets on the announcement by the Turkish regime that it intended to restrict abortion and make other regressive changes to reproductive health laws.

Ataturk's grand vision of Turkey as a secular, progressive and modern nation is now a thing of the past. Headscarves are now making their way into universities where they were once banned. Women in all-enveloping burkas are seen on the streets of Istanbul and Ankara in numbers never-before envisaged, partly — we understand — because of an influx of those from the much more conservative countryside.

It is a big disillusionment for those young people who put their lives on the line to bring the old, repressive regimes to an end only to find that another, even worse totalitarianism is sneaking up on them in what seems an unstoppable march.