The myth of the Nadia Eweida case gets another dishonest outing 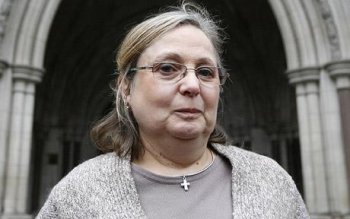 During an exchange at Prime Minister's Question Time yesterday, David Cameron was asked by David Davis MP about the case of Nadia Eweida, who has appealed to the European Court of Human Rights after she was told by her employer, British Airways, that wearing jewellery – which happened to be a cross – over her uniform, was against the company's uniform policy. Mr Davis had already asked the same question of the Justice Minister Kenneth Clarke at Justice Question Time on 3 July. In that instance he was given a more measured answer by Mr Clarke who made no promises.

He found an answer that was more to his liking yesterday. Mr Davis told the PM that the airline's refusal to allow Miss Eweida to wear her cross was a "disgraceful piece of political correctness" and asked why the Government was opposing her appeal. "I cannot believe the Government is supporting the suppression of religious freedom in the workplace, so what are we going to do in this case?"

In response, Mr Cameron said he that he was fully supportive of employees' right to wear religious symbols at work, adding: "I think it is an absolutely vital freedom."

He went on: "What we will do is that if it turns out that the law has the intention [of banning the display of religious symbols in the workplace], as has come out in this case, then we will change the law and make clear that people can wear religious symbols at work."

Ms Eweida had refused to comply with the company's rules on the grounds that she is a Christian and was duly disciplined. There then followed a long drawn out series of court actions all of which found against her.

She has now taken her case to the European Court of Human Rights while politicians and journalists continue to misrepresent the facts of the case.

Of course there is no ban on people wearing religious symbols at work, but there is a right for employers to ask their staff to comply with uniform policies or health and safety regulations.

It is unclear what legal change Mr Cameron is contemplating, if indeed he is contemplating making any change at all. Is he going to take away the right of employers to run their places of work according to their business needs? Is he going to suspend health and safety considerations if the person concerned claims to be a Christian?

Ms Eweida has no doubt what the Prime Minister should do. She told the Daily Mail yesterday: "Of course, it is excellent news that the Prime Minister says he will change the law - but why doesn't he get on with it? Up till now the Home Office has said it would be too cumbersome for employers to have to look after all their employees' religious requirements. If Mr Cameron means what he says about overruling them, then he should not wait for the European court to decide but change the law now."

So what exactly would be the "religious requirements" of employees that Ms Eweida speaks of?

If a Christian employee doesn't want to work on Sunday (in a job that has a 7 day shift system) will they be able to demand exemption? (Mr Davis forgot to mention that Nadia Eweida had made just such a demand of BA – and, she didn't want to work at Christmas either, apparently unconcerned about the contract she had signed, and her non-Christian colleagues and their needs). Are Orthodox Jews to be enabled by the law to demand an exemption from Saturday working and Muslims from Friday even if the business cannot cope with it? Will Muslim women teachers who want to wear a full burka in class have to be allowed to do so? Just what precisely is Mr Cameron proposing for religious people – carte blanche to demand whatever they want at work so long as it has a religious label attached?

Up and down the country there are millions of people wearing crosses in the workplace with no problem whatsoever. This gives lie to the idea that there is some kind of generalised ban on religious symbols at work. But if employees have a job where a dangling piece of jewellery might pose a risk to their or other people's health (such as in an operating theatre) are they going to have the right to refuse to take it off because it has a cross attached to it?

It is frustrating indeed that the myth of the Nadia Eweida case has become so deeply entrenched in our collective consciousness. It has been put there by systematic lying and misrepresentation on the part of the press and by evangelical activists who are seeking special privileges for Christians in the workplace.

For those of us who have read the court and tribunal judgments and followed the case thoroughly (rather than basing our knowledge on the skewed and one-sided reports in the Daily Mail) we know that Nadia Eweida is not an innocent victim of religious prejudice. She is a determined activist who has bullied British Airways into giving her everything she wanted, but nevertheless will not let the matter drop..

I sincerely hope that she loses her appeal to the European Court. The National Secular Society is the only organisation we know of to be given leave to argue in the ECHR that the courts reached the right decision in this case (and three others), whereas a large number of submissions have been made arguing the contrary, including one from a well funded American evangelical organisation. Our submission was written by leading human rights lawyer Lord Lester.

Read the true story of the Nadia Eweida case here

Why the Government is fighting the cross-ban case