The wailing pope and his dirty laundry 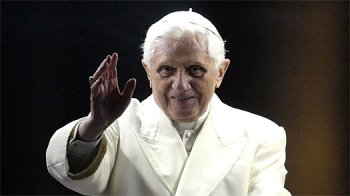 It's always a pleasure to read that the Pope is upset. Nobody deserves to be upset more than His Holiness.

This time Mr Ratzinger is wailing about the publication of a book, His Holiness: The Secret Papers of Benedict XVI, by Italian journalist Gianluigi Nuzzi. It is based on documents leaked from the Vatican by un-named sources. The documents reveal a web of corruption and cronyism within the walls of Vatican City that would put a Dan Brown novel to shame.

You can read some of the details in this article.

The Vatican launched an investigation into who could have passed the documents on to the journalist and eventually pinpointed the Pope's valet, Paolo Gabriele. Yes, the butler did it!

Or that's according to the Vatican who are now suspected of making this poor man — presently under arrest by the Vatican police — a fall guy.

The real culprits may well be Cardinals who are playing hardball politics in a power struggle within the Holy See.

In a damage limitation exercise, the Pope's aides say that the book represents "a brutal personal attack" on the Pontiff. And if that piece of emotional blackmail doesn't work, His Holiness blames "the media" for exaggerating and lying about the affair.

But that has always been the last resort of the guilty – blame the messenger for bearing news you don't want people to hear.

Nobody likes to have their dirty laundry aired in public, but the Vatican is not a private individual and Ratzinger is a public figure. Both present themselves as the founts of all that is good and moral and dictate to the world how they should live.

But this book illustrates (yet again) that the Vatican and all it represents is the opposite of moral. In fact if only half this is true, the place is a nest of vipers, a refuge for liars, cheats, thieves and those who cover up the repeated abuse of children.

The Vatican is already trying to cover its misdemeanours by sacking the head of the Vatican Bank who has been under investigation by the Italian authorities for money laundering. The US state department now includes the Vatican in its list of countries considered vulnerable to money laundering. The Vatican now hopes that it can quench this latest scandal by hitting out at those who would bring its dirty secrets into the light.

But the days when a pope could raise his eyebrow in disapproval and everyone would immediately obey are gone. The book has become a best seller in Italy over the week since it was published.

Let's hope it is soon translated into English so the truth about the Vatican's profound corruption can be revealed to an even bigger audience.