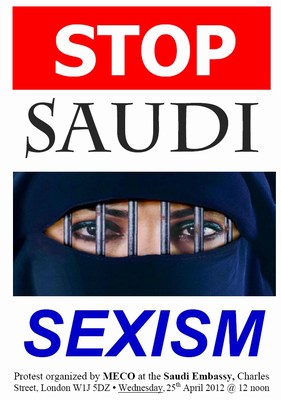 The Muslim Educational Centre of Oxford have organised public protest against Saudi sexism in London following official confirmation by Saudi Arabia that it will be sending an exclusively male team to the London Olympics.

Here is the announcement from the Muslim Educational Centre of Oxford:

A public demonstration against sport sexism at the Olympic Games will be held outside the Saudi Arabian embassy, 30 Charles Street, London W1J 5DZ on 25 April 2012 at 12 noon. (Nearest tube station: Green Park).

Following belated official confirmation by Saudi Arabia that it will be sending an exclusively male team to the London Olympics, this depressing news has to be challenged by all thinking Muslims the world over.

It is imperative that progressive British Muslims protest this tyrannical regime's gross distortion of Islam as well as its flagrant violation of the Olympic charter. This repressive desert kingdom will now be the only country in the world that will have no female contingent at the Olympic Games. All other Muslim nations are sending mixed gender teams to the Olympics (of course, appropriately dressed).

Not only does the indefensible Saudi decision contravene the egalitarian principles of authentic Islam, but it also flouts the stringent regulations of the International Olympic Committee, which states that 'any form of discrimination with regard to a country or a person on grounds of race, religion, politics, sex or otherwise is incompatible with belonging to the Olympic Movement'.

For these compelling theological and human rights reasons, MECO (Muslim Educational Centre of Oxford) is initiating a nationwide campaign to protest the deliberate exclusion of women from the national squads of Saudi Arabia at the London Olympiad. But it is not enough just expose the chauvinistic Saudis and their bigoted Wahhabi clergy for their primitive sexism that is wrapped up in their notions of Islam. Indeed, MECO has openly called for Saudi Arabia to be banned from the London Olympics and is leading the campaign to this effect.

It is shameful that a despotic Muslim monarchy has not only denied fundamental human rights to half its citizens on the basis of a distorted theology but has also defied the noble aspirations of the Olympic movement by fielding exclusively male teams. In the past, when nations have violated Olympic guidelines, they were automatically suspended from international competition. South Africa was banned from the Olympics for its racist apartheid while Afghanistan's Taliban zealots were excluded from the 2000 Sydney games because of their sexist ideology. So, why has a feudal Muslim kingdom not been required to adhere to Olympic rules and been allowed to send male-only teams to the London games? Is it because it is oil-rich and a pro-Western puppet regime? It is high time that the Olympic hierarchy as well as the international community take a principled stand by demanding that this vile Muslim autocracy either has mixed gender participation or be banished from the Olympic Games.

MECO urges the British public in supporting its bold campaign for Muslim female empowerment by targeting those who subvert pristine Islam and who defile the lofty ideals of the Olympic movement. Saudi Arabia (and also tiny Brunei) must be barred from the forthcoming London games because of their blatant sexism. Anything less will be an embarrassing toleration of female discrimination in our liberal democracy and gender equal society.

We call upon all right-minded people, Muslim as well as those of other faiths, to join us in demanding that chauvinistic Muslim countries be banned from the Olympic Games for their endorsement of sexual apartheid in sports. Please circulate this communication to those who might be interested to come to the demonstration. Many thanks.

More on this story here and here.