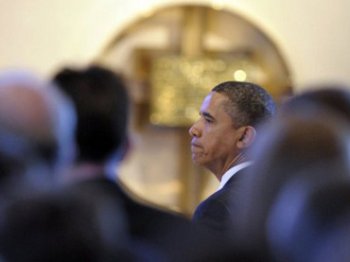 The Catholic Church seems to be turning itself from being a religious body into being a rather unpleasant political party – one that is so reactionary it makes the Tea Party look like the Teddy Bears Picnic.

For instance, the Conference of Catholic Bishops in the USA has declared a fortnight-long "Fight for Freedom" campaign starting on June 21. 18,000 parishes are to be called to "energise Catholics" against what the bishops see as a Government attack on religious freedom. It is particularly concerned with the Obama administration's mandate that religion-controlled hospitals and universities supply insurance cover for procedures that the Vatican finds morally unacceptable.

This is a risky move by the church which faces humiliation if it fails to bring the Government into line. There is also the slight problem of opinion polls showing that American Catholics in general are completely out of sympathy with the Church's teachings on contraception. One recently showed that 89% of married Catholic women used artificial birth control. A Pew research poll also showed that a significant majority of Americans think religious bodies should stay out of politics.

Despite the Government offering exemptions from the Department of Health and Human Services mandate (HHS mandate) so that the Catholic Church will not have to pay for contraception or anything else that it finds unacceptable, the bishops will not relent. Their ultimate aim is to scupper the provision of contraception for everybody under this new health scheme.

This is not a campaign based on rational argument; it is framed in hysterically emotional terms. Some of the bishops seem severely in need of Prozac to calm them down (although they probably have moral objections to that, too).

The campaign that the Church has stirred is extremely powerful. If you enter "HHS mandate" in to Google, you will find page after page of petitions, propaganda, ranting and railing against the mandate.

And it's soon going to get a whole lot worse. To give an idea of the kind of overwrought rhetoric we can expect over the next few months, let's start with Bishop Daniel R Jenkey of Illinois who spoke at an event called "A Call to Catholic Men of Faith".

According to Jenkey the Health and HHS mandate can never be accepted: "No Catholic institution, under any circumstances, can ever co-operate with the intrinsic evil of killing human life in the womb. No Catholic Ministry – and yes, Mr President, our schools and hospitals are ministries – can remain faithful to the Lordship of the Risen Christ and his Glorious Gospel of Life if they are forced to pay for abortions." He called on American Catholics to vote "with their conscience" in the presidential election – that is to say, against Obama. "This fall," he said, "every practicing Catholic must vote, and must vote their Catholic consciences, or by the following fall our Catholic schools, our Catholic hospitals, our Catholic Newman Centers, all our public ministries —. Because no Catholic institution, under any circumstance, can ever cooperate with the intrinsic evil of killing innocent human life in the womb."

The bishops said that the Church had survived thousands of years of persecution and will survive Obama – but it will take "heroic Catholicism, not casual Catholicism".

Bishop Jenkey then said: "May God have mercy on the soul of those politicians who pretend to be Catholics in church, but in their public lives, rather like Judas Iscariot, betray Jesus Christ by how they vote and how they willingly cooperate with intrinsic evil."

Jenkey recalled in detail other leaders that have "tried to force Christians to huddle and hide," including Adolf Hitler and Joseph Stalin.

"Hitler and Stalin, at their better moments, would just barely tolerate some churches remaining open, but would not tolerate any competition with the state in education, social services and health care," he said. "In clear violation of our First Amendment rights, Barack Obama — with his radical, pro abortion and extreme secularist agenda — now seems intent on following a similar path."

The American bishops suggested that Catholics should not be expected to abide by laws that go against the "religious conscience", and this was supported by the Vatican. In a speech at the Catholic University in Milan, a senior Vatican official, Cardinal Giovanni Lajolo, said that there should be stronger protection for both the Catholic Church and individual Catholics when they are faced with laws that conflict with the "moral norms".

Lajolo said that it was "essential" that "the freedom of the church and of its institutions to live and act in conformity with its own religious conviction is always guaranteed." He called for "conscientious objection" to be enshrined in civil law."

A New York Times poll in March showed about 51 per cent said that employers who object on moral or religious grounds should be able to opt out of providing birth control for their employers. Forty per cent said no.

Catholics for Choice, the liberal voice of Catholics, was quickly on the scene. John O'Brien, its president, said in a statement: "The bishops have failed to convince Catholics in the pew to follow their prohibitions on contraception. Now they want the Government to grant them the legal right to require each of us, Catholic and non-Catholic alike, to set aside our own guaranteed freedom from government-sanctioned religious interference in our lives."

The editors of Commonweal, a liberal Catholic magazine, said the bishops "vastly exaggerate" threats to religious liberty. In addition "the tenor of the bishops' statement runs the risk of making this into a partisan issue during a presidential election in which the leaders of one party have made outlandish claims about a 'war on religion' or 'a war against the Catholic Church'."

And in Britain the Catholic Church has also adopted an increasingly belligerent tone. In Scotland and England, where the Governments are consulting on the introduction of marriage for same-sex couples the bishops and cardinals have delivered overtly political messages in their campaigns.

The church's representatives are pretty ruthless in their pursuit of their goals and use the language of extremism. Their rhetoric, when they aren't getting their own way, is sometimes brutal, and yet any attempt to reply will be condemned as "anti-Catholicism". It seems they have learned a trick or two about silencing critics from the proponents of "Islamophobia".

But what the Catholic Church hasn't yet learned is that the more they rant and rave like this, the more extreme their demands and the more political they become, the fewer followers they have.

The Pope, from whom all this authoritarianism ultimately emanates, doesn't care. He has said he would prefer a smaller church with a more obedient flock than one made up of "cafeteria Catholics" who pick and choose which teachings they like.

I'd be happy with that, too, because then we could once and for all ditch the myth that the Catholic Church is in any way a source of compassion or humanity.