Without a pack of lies to back them up, Christian claims of persecution fall flat on their face 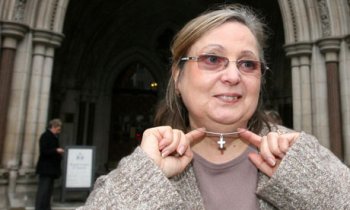 The old adage "never believe what you read in the newspapers" has never been as apposite as it has been over the past week.

The Daily Telegraph and the Daily Mail have surpassed themselves with headlines about the wearing of Christian crosses at work.

The Mail announced: "Minister in legal battle to STOP Christians being able to wear a cross to work." Now what would you understand from that headline? That the police would be enforcing the exclusion of crosses from the workplace, perhaps? Or that new rules were to be introduced to compel employers to sack workers found in possession of the "banned" symbol?

The Daily Telegraph headline read: "Christians have no right to wear cross at work, says Government."

The story attracted something like 2,000 comments from readers ~ none of whom seemed to have read beyond the headline and most of whom were, of course, fizzing with indignation. You can't blame them ~ so would I be, if the headlines bore any relation to the truth.

In fact, there is no ban on crosses in the workplace. Up and down the country, in workplaces from Lands End to John O'Groats, people are wearing crosses of all shapes and sizes, and it isn't a problem. No-one is complaining, and nobody cares.

But occasionally there is an issue. Such as that of Nurse Shirley Chaplin, who was working in a hospital wearing a cross on a chain around her neck. The NHS trust's uniform and dress code prohibits front-line staff from wearing any type of necklace ~~ be that a crucifix or a lucky pixie ~~ in case patients try to grab them.

It offered Mrs Chaplin the compromise of wearing her cross pinned inside a uniform lapel or pocket, but she said being asked to hide her faith was "disrespectful".

Now this case wasn't really to do with the symbolism of the cross at all. It was about dangling jewellery. She was perfectly at liberty to have the cross about her person if it was important to her, but she couldn't have it ~~ or any other item ~~ dangling from a chain around her neck.

The Mail and the Telegraph then took up the completely distorted version of the story from the Christian activists who had decided to take it to court.

But in court the whole story has to be told, not just the carefully edited highlights so favoured by the Christian Institute and Christian Concern (who are behind most of these cases). And when the court heard all the details, they threw the claims out. And so did the appeal court. This wasn't about persecuting Christians, it was about health and safety.

And then there was Nadia Eweida, the now infamous British Airways worker who was equally convinced that her employer was discriminating against her religious beliefs when it asked her to remove a cross from her uniform.

BA had a policy of not permitting additions to the uniform and so ordered Ms Eweida to follow the rules everyone else had to follow. She refused and claimed religious discrimination.

Her claims were taken up by the Christian Institute, inflated out of all recognition by the Telegraph and the Mail and suddenly BA was the equivalent of the Emperor Nero, gleefully feeding poor, innocent Christians to the lions.

Except the background was not told until the case came to court. And even then, the inconvenient details about Ms Eweida's intolerable behaviour were never reported in the press. Despite an Employment Tribunal finding against her and an appeals tribunal reinforcing that decision, Ms Eweida continued to be portrayed as the victim of religious intolerance.

You can read the facts here that the papers left out of their reports.

Ms Eweida was, in reality, a nightmare employee ~ a fact that was commented on repeatedly at the tribunal. Her numerous demands for special treatment because of her religion showed a complete indifference to the effect it would have on the lives of others. Indeed, in one instance she made an accusation against BA's Christian Fellowship group that turned out to be completely fallacious, and the tribunal felt compelled to say: "We find it demonstrates to a degree the extent to which the claimant [Eweida] misinterpreted events, as well as her readiness to make a serious accusation without thought of the implications."

You won't read any of this in the Mail or the Telegraph.

The Archbishop of Canterbury announced last weekend that the cross should be seen as "religious decoration" rather than a Christian requirement. The agitators think this is "unhelpful". Of course they do, because it weakens their claims that crosses must be on show for all Christians whatever the circumstances.

So these two women, again with the help of the evangelical activists who are seeking special privilege for Christians, have gone to the European Court of Human Rights claiming that the equality law is wrong and should be changed. The Government has argued that the court's decisions were right and that the law has been correctly applied in both cases. The National Secular Society has made the same argument in an intervention in the case, the only intervener to do so.

This could hardly be more different from arguing that the Christian cross must never be seen in the workplace again, as the newspaper headlines imply.

With such dishonesty and distortion how can the truth of these cases ever be known?

In a sense, this has been a brilliant propaganda coup by the Christian activists who have struggled so hard (and spent so much money in the courts) to plant in the minds of the British that religion ~~ and in particular, Christianity ~~ is under fire in this country. Now that impression is well and truly implanted despite it being completely untrue.

But we should bear in mind that of all the cases that have been taken to court ~ the hotel owners who wouldn't rent a double room to a gay couple, the nurse who wanted to invite her patients to pray, the Relate counsellor who wouldn't counsel gay couples, the list is endless ~ none of them, not a single one of them, has succeeded.

And that's not because the courts are "Christianophobic" as former Archbishop of Canterbury Lord Carey claims, it is because the cases had no merit.

See also: Red tape is OK for Christians, it seems

Religion and the law