Countless millions of taxpayers’ money spent on discrimination in schools 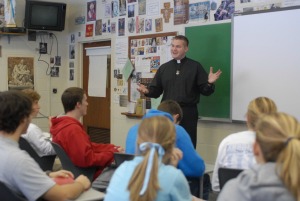 We often complain about the increasing amount of religion in schools, but it is not until you look at the job advertisements in papers like the Times Educational Supplement and the Church Times that you come to realise just how determined the churches are to use schools as recruiting grounds.

The TES Jobs Supplement – which is much bigger than the TES itself – reveals the level of religious infiltration in state schools - funded by you and me.

In last week's issue for instance, there were dozens of recruitment ads for Church of England and Catholic schools. One example was St Claire's Catholic Primary School in Coalville, Leicestershire. They need a headteacher and the ad reads: "Our Catholic faith is at the heart of our school. Everything we say and do reflects the Christian message and we are committed to living the Gospel values each and every day."

Croughton All Saints CE Primary School in Northamptonshire is also looking for a headteacher who will "work closely with the Rector and Diocese to ensure that the Christian is embedded throughout the school's activities."

Or what about St Hilda's CE Primary School in Firswood, Manchester that wants a headteacher who is "fired by the church's mission expressed in education, and want to advance the Kingdom of God through church and school working closely together."

St Joseph's & St Teresa's in Doncaster wants a headteacher with a "strong personal faith and a clear vision of Catholic Education". St Bartholomew's CE Primary in Binley,Coventry is looking for a leader "whose vision and professionalism is underpinned by a clear and demonstrable faith."

St Mary's Island CE Primary school asks applicants for the headteacher post to "provide a faith reference" to prove that they will uphold the "Christian leadership that are at the heart of our caring environment".

The St Francis Xavier joint Roman Catholic and CE School is looking for a headteacher, saying: "We live and breathe our values. Respect, dignity, faith and justice are at the heart of our school". Unfortunately, religious discrimination of the most despicable kind is also at the heart of their school as "all applicants must be committed and practising Catholics".

And so it goes on, dozens and dozens of them, all requiring applicants to be of a particular faith and to be able to prove it, presumably with an approving letter from their local priest.

The fact that there are so many such ads may indicate that they are having problems finding enough pious teachers to fill the posts. It also indicates that because the diocese has complete control of them, they are being used as indoctrination centres.

We've asked this a thousand times before, but no-one in power is inclined to answer. Why is taxpayers' money being used to promote religion? Why are these religious schools allowed to pump their own version of "faith" into the heads of their charges – children who cannot escape and have to attend by law?

And restricting employment only to those who are as determined as the local diocese to brainwash children is not the only way the churches dip into the education budget for their own evangelical purposes. Increasingly school chaplains are being employed to ensure that if they can't get teachers to do the brainwashing, they'll have a professional on hand to do it for them.

In the Church Times we see an advertisement for two chaplains on a salary of £30 – 35k for the Sir Robert Woodard Academy, Lancing and St Peter's Academy Stoke-on-Trent. "The chaplain plays a key role in supporting the spiritual life of the academy community, leading the formal and informal expression of Christian ethos and worship," says the advertisement. Nothing about educating children, which is what schools are supposed to be for.

The Kings CE School in Wolverhampton also wants "an ordained Anglican" who can develop the "faith and worship life of the school community".

Church schools also have another arm to their indoctrination tactics. This week the Guardian crunched some official Government statistics to prove what we've been saying for decades – that religious schools are enclaves of middle class privilege. Using the selection criteria that are unique to these schools, they can ensure that only the best-achieving and best-supported pupils get in. That puts the schools at the top of the league tables and it then becomes a circle of success as middle class parents lie, cheat and steal to get their children in.

The state is spending tens of millions of pounds on the salaries of clergy people as well as funding religious discrimination and indoctrination in schools. How did this happen?

And more importantly, how are we going to stop it?

Read more about the Guardian's findings:

How many poor children go to "faith schools"?