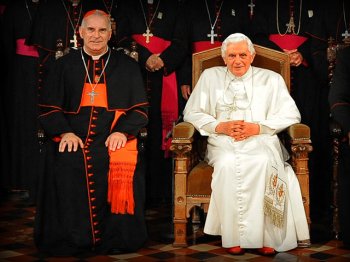 It's happening all around the world. An increasingly politicised Catholic Church is manufacturing confrontations with governments in an effort to increase its influence and revitalise its dwindling flocks.

It is clear from what the Pope has been saying over the past five years that he intends to return Catholicism to what he sees as its rightful place in the heart of Government.

In America, a confrontation with the Obama administration over contraception coincided with the Republican presidential candidate race. Two of the presidential candidates are Catholic and they made full use of the opportunity to present the Obama health insurance policy as "a war on religion". They were playing to the religious right's gallery, making it one hell of a bruising battle.

In Britain, a similar tactic is being played out over gay marriage. The Catholic Church has alighted on this issue as its means of challenging the Government, flexing its muscles and attempting to pressurise a change of direction.

If Mr Cameron yields to this agitation, it will be seen as a demonstration of the Church's power and it will lead to many other regressive demands that politicians will be reluctant to resist. Abortion is the next issue waiting in the wings.

If the Prime Minister stands firm against this present battering, it is the Church that will be badly damaged.

The Catholic hierarchy has tried this tactic before over gay couples accessing Catholic adoption agencies. When the previous government ruled that equality laws really were equality laws and there was no let-out for the Catholic Church, the clerical hierarchy geared up for a major face off with parliament.

But it was to no avail. Despite an unpleasant, sometimes brutish campaign, it lost that battle. Now it is coming back with a challenge over gay marriage.

The language that is being employed, the angry rhetoric that is flying from cardinal's palaces and archbishops lairs, is overblown, bordering on the hysterical. People – Catholics included - are repelled by the nastiness of it, the unnecessary vehemence that is directed at people who, perhaps, they know and love.

Cardinal O'Brien's stupid comparisons with slavery and his incoherent attempts to suggest that heterosexual marriage will be destroyed if gay people have the same rights, do him no favours. The backlash against his utterances has been immediate and almost unanimous. This kind of bigotry is seen by most people as crude and like something from a different era.

Now we have Archbishop Vincent Nichols issuing a letter to all Catholics, to be read out at Mass this Sunday that asks them to support the Church in its campaign to thwart the right of gay people to enjoy civil marriage (that's civil marriage, nothing to do with churches).

It is difficult to know how this will be received, but if opinion polls are anything to go by, the average Catholic in the pew does not share the Vatican's antipathy towards rights for gay people. Few of them will want to take active steps to deny their fellow citizens the right that they enjoy (or not, of course, depending on the state of their marriage).

But the Church has another agenda. It wants its doctrines written into law so that everyone must observe them. The Catholic Church has failed in its attempts to evangelise the nation, so it will try to force it into Catholicism through legislation.

In many ways there is more at stake here than gay marriage. This is the Catholic Church trying to bully its way into political power through lobbying by intimidation and emotional blackmail. It has many allies on the Conservative back benches.

And now we have a rapidly organising religious right emerging in Britain that will be giving all the support it can to overturn the plans for gay marriage, providing another echo of what is happening in the United States.

Religion is trying to be resurgent in this country. We've been able to laugh at it up until now. But the time has come for us to take it seriously and put up a resistance.

If we don't we will soon feel the impact in our day to day lives.