What’s a fate worse than death? Being brought up in the Catholic Church! 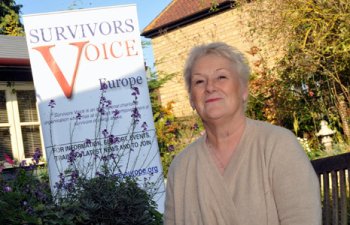 A fate worse than death. When I was younger, this is the phrase people used when they referred to being raped. Adults would give each other knowing looks when talking about someone "if she is not careful she'll end up murdered - or worse" I couldn't imagine anything worse than being murdered, but it seemed there was something even worse.

It wasn't terribly long before I found out what they meant, and indeed they were right. My abuses at the hands of a priest are well documented, and I have talked about how my life started to go downhill from the moment I was raped. What was hard to understand was: why, if I had suffered "a fate worse than death" no one did anything about it! Had I been murdered perhaps they would have cared.

I was brought up with all the horrific fear stories of hell fire and damnation. In that Catholic world everything, apart from breathing, was sinful. Aged five I was told to pray for a cousin to die because he was about to marry a divorcee; his mother's priest told her that he would be better off dead than living in sin, so we should all pray for him to have a "happy death".

Consequently, every time I put a childlike foot wrong, I was wondering if someone was praying for me to die too. It was a world where everyone outside of the Catholic Church should be pitied, and best avoided, where punishment for every minor misdeed was exclusion and silence, where confession had to be weekly. God knew every thought, word and deed and was waiting to punish severely, and priests, who were next to god, were to be idolised.

This was a world where we were not allowed to talk about science or evolution, or "wicked" Queen Elizabeth I because she was "anti-catholic", a world where babies who weren't baptised floated around in limbo for eternity, where the only reason to be alive was to "know god, love him, serve him in this world and be happy with him forever in the next" (as long as you were a practising Catholic!). Happiness was a sinful goal. Every time a priest crossed your doorstep it was a blessing, (even the bastard who abused me - who I should pray for!)

Despite all that, aged thirteen I was thrown into a sordid world I had never imagined existed.

A world of alcoholism, emotional and mental turmoil, self-harming, starving and self destruction. A world of self loathing, guilt and secrecy and lies, believing that I was bad for being raped. A world which led me to a violent and unsuitable marriage, to years of misery and depression, where mercifully the only thing that saved me was my six children. Like Taurus going through the china shop of life.

I had a long hard road to recovery as a single and ill-equipped parent of six but with a determination to make things better for them.

I worked hard to get rid of the distorted, cruel indoctrination of the Catholic Church, and struggled to make sense of the world. Eventually while watching my wonderful children grow and flourish, meeting my husband I saw a glimmer of hope for a future.

Then on this day, 24 years ago, my world was shattered, my heart was broken entirely when my beautiful son Nick was killed. I wanted to die myself, no Mother should ever experience this pain. Because of my distorted Catholic background, I believed it was my fault, my fault for being happy, my fault because I was no good, my fault because I deserved to die and Nick did not.

I have worked hard over the years towards a recovery and sound mental health. One of the last things my son said to me was "Mum I am so proud of you" and I did not deserve it. I have tried hard to become worthy of that pride, my joy always is when I am able to use my experiences to help others, it somehow transforms that shit into manure for growth.

I am not always in good shape, I have ups and downs, still feel insecure and vulnerable often but most of the time I am OK - apart from this day - apart from January 18th when I am again consumed with grief and cannot bear to talk to anyone, where my family tiptoe around me for fear I am about to collapse, which I very well might.

On this day I see the greyness out of the window and remember that phone call. On this day the pain is again so unbearable that I would choose oblivion. My son, I know, is no more dead on this day than any other, but today it is very real again.

Of course the Catholic Church didn't drive that car, didn't pour my drinks, or cut my body, it wasn't there when I was screaming in the night with terrors , or scrubbing my genitals with a nail brush until I bled because of feeling dirty. It wasn't with me when I was feeling lower than a snake's belly in the grass, unworthy and loathsome. But it certainly put me there!

It was right there in the beginning of it all. It allowed me to feel so bad about myself as a child that I thought I wasn't worthy of life let alone love, it put a paedophile into my home and allowed me to be abused and raped and disregarded and threw me into a lonely world with no one to help me. It allowed the perpetrator to get away with it, like most others, and it saw me and people like me as collateral damage, in its narcissistic and singular desire to get away with its crimes against humanity.

It continues to abuse and cover up its crimes and it does get away with it. And worse than that, like all narcissists, it doesn't give a damn.

So ask me today what my feelings are: Being brought up in the Catholic Church – that is the Fate Worse than Death.

Sue Cox is a founder member of Survivors Voice Europe