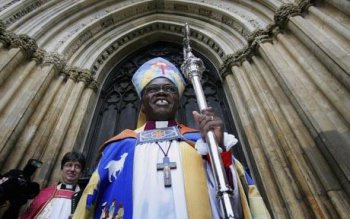 The Archbishop of York, John Sentamu, has warned the government that if it tries to legalise gay marriage, it will face a huge onslaught from religious bodies.

These are not empty words. The Church of England and the Catholic Church are already in talks to launch a major fightback against the coalition's plans to make marriage - in some form - available to same sex couples.

"Marriage is a relationship between a man and a woman," says Dr Sentamu. "I don't think it is the role of the state to define what marriage is."

Yet, the government's plans will specifically exempt religious groups from participating in the conducting of same sex unions if they don't want to. Dr Sentamu asserts, in effect, that it is his (dwindling) Church not parliament that alone has the power to define marriage, even though civil marriage, in which all religious elements are proscribed, has existed in England since 1836.

You just go to your local town hall and they will do the honours with the express non-involvement of the Bible, Koran, Jesus or God.

Dr Sentamu's reasoning is: "Marriage is set in tradition and history and you can't just [change it] overnight, no matter how powerful you are."

If we follow this through to its logical conclusion nothing would ever change. And, indeed, Dr Sentamu would probably be a slave somewhere, not a Bishop of the Established Church. Marriage between races would also be forbidden and Belgo wouldn't be able to sell Moules Mariniere.

Then Sentamu tries the old anybody-who-doesn't-do-as-I-want-is-a-dictator ploy. "We've seen dictators do it in different contexts", he says, "and I don't want to redefine very clear social structures that have been in existence for a long time and then overnight the state believes it could go in a particular way. It's almost like somebody telling you that the Church, whose job is to worship God [will be] an arm of the Armed Forces. They must take arms and fight. You're completely changing tradition."

This is a completely false comparison, but it is indicative of the kinds of arguments we are going to see over the next few months, particularly after the government launches its consultation on the issue in March.

Needless to say, the Catholic Church is also particularly keen on thwarting the government on this issue. Archbishop Peter Smith of Southwark was at the Home Office meeting. Let us not forget that when he was Archbishop of Cardiff, Mr Smith opined that gay people should not be employed as teachers. So we know where he is coming from.

Last week, church leaders held a meeting with Home Secretary Theresa May to make their objections known (it is revealing how the churches simply only need snap their fingers and the Home Secretary invites them over). To her credit, she apparently told them categorically that the plans would go ahead and, in fact, that the consultation was not about the principle - which has already been agreed - but only the details.

Ms May reassured the two Churches that the government had no intention of acting on a suggestion from conservative backbencher Mike Weatherley, who wrote recently to the prime minister saying that same-sex couples had an "absolute right" to marry or register a civil partnership in a church and any church that failed to comply with this 'right' should be barred from conducting any marriages at all.

Naturally this has infuriated these 'church leaders' and they have now go together to plan a concerted campaign to stop the legislation.

Last Wednesday committee of leading bishops of the Catholic Bishops' Conference of England and Wales met to finalise details of a campaign against the Government's plans. Also at the meeting was the Church of England's Archbishops' Council secretary general, William Fittall.

Right-wing Tory MPs are likely to join with the churches when the issue comes before parliament and the plan is understood to have been criticised by Tory MPs at private meetings of the Conservative Party's 1922 Committee. Gay marriage is, however, strongly supported by the Liberal Democrats, who have pressed for its legalisation.

A consultation on gay marriage has already been held in Scotland, with the Scottish government hoping to introduce the change, possibly later this year. The Scottish Catholic Church reacted with bitter attacks on the government and on gay people. The Scottish consultation is thought to be potentially more radical in that it does not appear to rule out iopening up existing marriage legislation to same sex couples, but this is not thought to be contemplated by the government in respect of England and Wales.

But, of course, these kinds of reactions do the churches no good. They simply reinforce the image they already have of being intolerant, dictatorial and completely out of touch with ordinary people's attitudes. Traditionalists argue that they cannot change the words of the Bible to fit modern thinking.

If that is true, then in all honesty they should be working not only to thwart gay marriage but to have all homosexuals stoned to death. Isn't that what the Bible tells them?