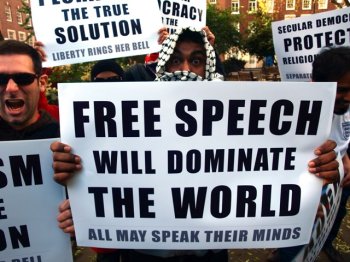 A recent letter to The Guardian stated that 'over the past decade, a number of academic studies have indicated a worrying and disproportionate trend towards negative, distorted and even fabricated reports in media coverage of the Muslim community'. It called for an inquiry into media representation of Muslims on a par with the Leveson inquiry.

The letter had a long list of signatories including human rights solicitor Imran Khan, Jeremy Corbyn MP, Bianca Jagger, Navnit Dholakia the deputy leader, Liberal Democrats, House of Lords and Farooq Murad of the Muslim Council of Britain. Some of the signatories have questionable records, as was pointed out on Harry's Place blog.

Whatever their good intentions, the signatories to the letter make the mistake of using the phrase "Muslims and Islam" repeatedly, as though they were the same thing.

Unfair, untrue and distorted coverage of Muslim individuals — as with any minority group — is wrong and should be challenged. It hurts real people who are often innocent of any involvement in the events being reported.

But Islam is a religion, a set of ideas and philosophies that must, under no circumstances, be protected from examination, criticism or even ridicule. There is a world of difference between hurting real people through press exaggeration and throwing brickbats at ideas which are arguable.

The Leveson inquiry seeks to protect people, not theologies. Islam must stand on its own merits and must be argued and defended with reason, not protected by law. We've done away with blasphemy laws in this country and we don't want them back in another form.

This conflation of religion with race is becoming an insidious tool to blackmail and manipulate people into ceasing their questioning of Islamists and their activities. To challenge any aspect of Islamic practice, however brutal and tyrannical, is now seen as an attack on people's racial identity.

It is rather like the Hamas practice of using "human shields" – hiding their military forces in hospitals, schools and mosques to discourage attacks from enemy forces. The Islamist activists in this country hide their real motives behind claims of "Islamophobia" and "racism" and successfully silence their critics in this way.

We've seen classic examples of that over the past couple of weeks with the bullying of university Atheist and Secularist groups. People who consider themselves liberal and who feel it is their duty to protect Muslims from discrimination – such a Students Union leaders – haven't yet worked out that criticising Islam is not the same as persecuting Muslim people.

The Guardian did not allow any response to the letter it printed. This is another indication that soon any public criticism of Islam as a theology will be completely impossible in this country.

And that is the ultimate aim of the violent and intimidatory activists who were so evident in British universities last week.

Read more about the incidents at University College, Queen Mary and the London School of Economics.