Cameron is joining the right-wing rush to religion 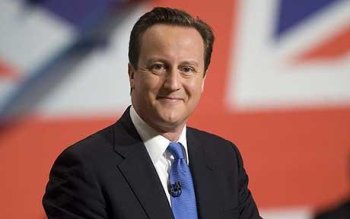 David Cameron's now notorious speech to the Church of England, in which he promised to elevate "Christian values" to a special place in society, has been much commented on in the past week.

The speech itself was confused, contradictory and in places downright silly – particularly the passages clearly written to appease his backbenchers. He said that the country needed Christian values, but didn't say precisely what those values were – although he was anxious to reassure people from other religions and those of no religion, that they were the same values that they shared, too.

So, they aren't Christian values then, they're universal values conscripted by Christianity (and every other religion). Compassion, concern for others, selflessness and all the other noble impulses Mr Cameron ascribes to Christianity were well known in human nature long before Christianity was concocted. They weren't originated by Christians or Muslims or Hindus. They are simply human values that religion presumptuously now claims to own.

But if we are talking about Christian values, let's think about misogyny, homophobia, irrationality. The King James Bible, which the Prime Minister lauded, may be a masterpiece of literature, but it is also the source of much cruelty. It has over the centuries provided justification for war, genocide, discrimination and separatism. It was ironic that in one paper last week there was a juxtaposition of two headlines – one reported Cameron's call for a return to Christian values and the other said "Tens of thousands of children abused at Catholic institutions – and the leadership knew all about it." Or, as Gwynne Dyer in Common Dreams put it:

"The King James Bible was published at the start of a century in which millions of Europeans were killed in religious wars over minor differences of doctrine. Thousands of "witches" were burned at the stake during the 16th century, as were thousands of "heretics". They have stopped doing that sort of thing inBritainnow – but they've also stopped reading the Bible. Might there be a connection here?"

For a century and a half, adherence to the Book of Common Prayer, prescribing use of the King James Bible (also known as the "authorised version"), was required in order to hold any office in government or the Church – the very antithesis of secularism. People of other faiths and non-conformists were treated abominably. These restrictions were rescinded piecemeal only in the early 19th Century.

Our concern here is not really about people's personal faith, it is about Mr Cameron's threat to adulterate our political processes with theology. Last week we reported another speech that he made in which he promised that he would "enhance faith-based education". This, together with his ideas for a "Big Society", in which secular social services will be handed over to sectarian religious interests, are all indications that he is recruiting religion to rescue him from the woeful mess the country is in.

In his speech he attacks secularism and implies that it leads to moral neutrality. It is unclear whether he doesn't understand the meaning of secularism and/or this is an outright attack on secularism without letting the facts get in the way.

But in invoking religion as the cure-all for social ills, he is following the pattern of right-wing regimes all round the world. In theMiddle East, the Arab Spring was at first optimistically regarded as a move towards democracy and a secularism that would allow these nations – long divided by seething sectarianism – to live in peace. Instead, they are opting for Islamism, a political system that will remove democracy and stamp the population into the ground a thousand times harder than any dictator that has done before. All promises of "moderate Islam" will soon be overtaken by the authoritarian, controlling instincts that religion displays whenever it has power.

In the USA, the race for the Republican nomination has seen candidates falling over each other to display their religious credentials. Each takes turn to make ever more extravagant promises to the resurgent religious right.

The latest is Mitt Romney who said in a recent speech:

"I know there are some people who would like to make this nation a secular nation, who want to take God out of everything that exists in this country. They try to say it's unconstitutional. I trust in God, and I know you do, and I believe it's appropriate for us to recognize in the public square that we do indeed have a creator and that we trust in our creator, particularly at this time of year. How do you take God out ofAmericawhen the declaration points out it's God that gave us those rights in the first place? I believe that we should be able to have religious ornamentation and celebration in the public square. Whether that's a manger or a menorah, or representatives of other faiths, it is important for us as a society to recognize that we look to God for many of our blessings."

This conservative holier-than-thou contest may play well in some parts ofAmerica, but if Mr Cameron thinks he can import it here, I would point out the summary of the religious statistics that were contained in the recent British Social Attitudes Survey. The authors – after demonstrating that half the population has no religion (which rises to 65% among 18-24 year olds) – concluded:

"What does this decline [in religious adherence] mean for society and social policy more generally? On the one hand, we can expect to see a continued increase in liberal attitudes towards a range of issues such as abortion, homosexuality, same-sex marriage, and euthanasia - as the influence of considerations grounded in religion declines. Moreover, we may see an increased reluctance, particularly among the younger age groups, for matters of faith to enter the social and public spheres at all.

"The recently expressed sentiment of the current coalition government to "do" and "get" God ([Baroness] Warsi, 2011) therefore may not sit well with, and could alienate, certain sections of the population."

Of course, many will see Mr Cameron's unconvincing declarations of faith to be a sop to certain backbenchers, who would love him to adopt a Mitt Romney approach to British politics.

And many Christians are mortified by the Prime Minister's use of the Bible for crude politicking. David Edgar has some sage words about that in the Guardian on Monday.

But at least Mr Cameron has one supporter – and that's the Pope who declared last week that religion (his religion, naturally) trumps any form of secularism.