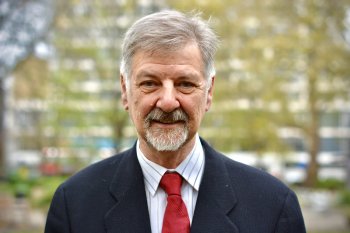 The National Secular Society is saddened to report the death of our former president Terry Sanderson aged 75.

Over the last few years, Terry had undergone various cancer treatments. His cancer returned earlier this year and attempts to treat the condition were unsuccessful. He leaves behind his partner of 40 years, current NSS president Keith Porteous Wood.

Terry Sanderson was born in Maltby, South Yorkshire, in 1946. The son of a coal miner, he grew up in poverty. He was the youngest of three brothers. In his autobiography he describes his family as "loving" and his childhood as "happy and sheltered".

Terry realised as a teenager that he was gay but found it difficult to meet other gay men until he joined the Campaign for Homosexual Equality. He became involved in gay activism when the local council refused hire of their function rooms for a gay disco and ended up coming out in a local newspaper interview. This was a shock to his family, but they were supportive.

As a young man, Terry tried a ranged of jobs, most notably working as a psychiatric nurse and occupational therapist. However, he had a passion for writing, and he wrote regularly for Gay News. He later got a job as part of the Women's Own agony aunt team. His talent for helping others and providing advice led him to write How to be a Happy Homosexual, the book he wished he had had when he was young. This was followed by other books providing advice to gay men and their families.

Terry's experiences in gay activism had shown him that much opposition to homosexuality was based on religious doctrine. He realised the need to limit the ability of religious organisations to impose their beliefs on others. He joined the NSS and became more actively involved when his partner Keith became Executive Director in 1996. Terry joined the NSS Council and was President from 2006-2017.

During his time as President, Terry oversaw a shift in the organisation's focus from atheism to secularism. He summarised his position thus:

"I would like us to position ourselves as a purely secularist organisation with a focused objective, that will not only champion human rights above religious demands but will also accept that religion has a place in society for those who want it, but on terms of equality, not privilege."

Notable campaigns during this period were the abolition of the blasphemy laws, which was finally achieved in England and Wales in 2008, and the protest against Pope Benedict's state visit to the UK in 2010.

Terry was succeeded as president by his civil partner, Keith Porteous Wood, who had just retired as Executive Director. He remained on the NSS council when his health permitted, finally standing down in 2020.

Terry was diagnosed with bladder cancer in 2017. He was open about his condition and wrote about his treatment in detail. He disliked the cliché that cancer is something that a patient must "battle" or struggle against, and his description of treatment suggests that it was something to be endured while experts did battle on his behalf.

Although Terry's treatments were initially successful, his cancer returned. In 2022, he announced that his recent immunotherapy treatments had been unsuccessful and that he was receiving palliative care.

He died at home on Sunday 12th June.

"Terry's positive vision and leadership were instrumental in revitalising the NSS and turning it into the effective campaigning organisation it is today.

"His advocacy of secularism was driven by a keen sense of fairness and justice – and a healthy disdain for religious leaders moralising about how others should live their lives. Terry's gay rights activism touched the lives of so many people – empowering them to be themselves and speak out against the injustice and bigotry they faced.

"I will remember him fondly for his good humour and no-nonsense approach to campaigning. His absence will be felt for many years to come."

"I am saddened to learn of Terry's death. He was my successor in 2006 as President of the NSS for the next eleven years. When I was President, Terry was a Vice-President alongside Jim Herrick. During that time Terry did much to assist in preparing the Annual Report. He was also the author and collator of the NSS weekly Newsline. At the time of the 150th anniversary of the NSS founding in 1866 by Charles Bradlaugh, Terry wrote in the celebratory brochure in 2016: 'Bradlaugh's attacks on religion, particularly on the outrageous privileges of the Established Church, were brilliant, scorching and necessary'. Unfortunately, many of those privileges still exist despite the Church's decline. It was good to see Terry last October at the unveiling of a new bust on Bradlaugh's grave in Brookwood Cemetery, Woking. He was smiling and happy - how we should remember him. Terry had charm and a positive approach to life. He will be sorely missed, and I offer my condolences."