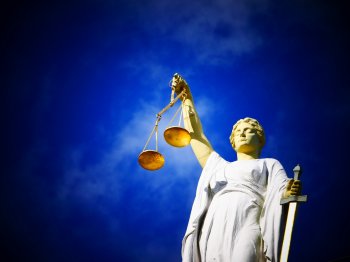 The National Secular Society has welcomed the inclusion of religious courts in updated guidance for prosecutors working on domestic abuse cases.

The Crown Prosecution Service (CPS) is consulting on updates to its legal guidance on domestic abuse to help prosecutors "ensure the delivery of justice" for victims.

In its section on 'race and religion', the updated guidance says prosecutors "should be aware of community courts/arbitration forums in some Jewish and Muslim communities" used by victims and perpetrators.

It adds prosecutors "will be aware that they should not be used as an alternative to criminal proceedings" and that some perpetrators "may use these mechanisms to make a case for staying with their partner, thereby enabling the abuse to be continued".

The NSS, which campaigns to ensure religious courts do not undermine secular justice or women's rights, said it 'strongly supports' the inclusion of this information in its response to its consultation.

It highlighted how Islamic sharia councils and Jewish councils (beth dins) reinforce patriarchal norms, and that beth dins play a role in religious 'divorce' refusal which has recently been recognised as a form of domestic abuse.

The NSS also welcomed the guidance's inclusion of issues such as forced marriage, 'honour' violence and female genital mutilation, and its caution that prosecutors "should be very careful not to make assumptions" that all domestic violence within minority ethnic communities takes these forms.

But it warned that elsewhere, the guidance risks absolving religious organisations of contributions to domestic abuse.

The guidance says it is a "myth" that religion is responsible for domestic abuse. The NSS said that while it "strongly agrees" the religious and cultural background of the perpetrator or victim does not justify or excuse abuse, it disagreed that it is a myth that religion or beliefs are in any way responsible for abuse.

It said there are many religious groups that believe women are subordinate to men, which in some cases extends to the belief that a man has the right to physically discipline his wife. In January the NSS reported an Islamic charity to the regulators after it found an article on its website condoning violence against women.

The NSS also said religious organisations teaching that divorce is wrong may put pressure on an abused partner to remain in the relationship.

NSS head of operations Helen Nicholls said: "We are pleased that this revised guidance does not shy away from confronting the ways in which religion may play a role in some domestic abuse cases.

"The inclusion of religious councils in the guidance is particularly welcome. Human rights groups including ourselves have long expressed concern that these 'courts' may undermine getting justice for domestic abuse victims, especially women.

"This guidance clarifies that everyone must be treated equally before the law – whatever their religious or cultural background, and whatever their community leaders may say."