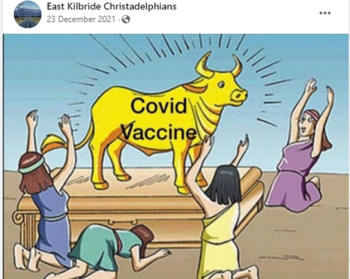 The National Secular Society has referred a Christian charity to the regulator after finding anti-vaccine and homophobic posts on its Facebook page.

East Kilbride Christadelphians made dozens of posts on its Facebook page that may undermine public health messages, despite charities being required to serve a public benefit.

East Kilbride Christadelphian Ecclesia is registered with Scottish charity regulator OSCR under the purpose of "the advancement of religion".

A video posted in December implies that vaccines are similar to a biblical story in which God punished people for worshipping a cow statue because "the word vaccine originates from the Latin word vacca, which means 'cow'."

It adds: "The consequences of not repenting of the medications are more plagues, which are listed in Revelations 16. We are currently living in the time of these plagues. It's time to repent of our sorceries before it's too late."

Some content appears to encourage defying government guidance on social distancing. A cartoon posted in November 2020 shows a picture of a coronavirus and a church, with the words: "We all get tested to see if God is first in our lives".

Another meme posted in October 2020 implies Covid-19 is a hoax. It displays pictures of the coronavirus next to the Bible quote: "God will send them strong delusion, that they should believe the lie".

Another meme posted in May says "Uncover Your Face" and quotes a Bible verse about "unveiled faces".

The NSS also raised concerns about posts with homophobic content.

Another posted in March shows a picture of a wolf in rainbow sheepskin, with the words "it's OK, we only want equality".

NSS head of policy and research Megan Manson said: "It is extremely disturbing to see a registered charity apparently discouraging the public from getting a Covid-19 vaccine or following social distancing guidelines, as well as promoting homophobia.

"These harmful messages are clearly being posted under the charitable purpose of 'the advancement of religion'.

"If this charitable purpose can allow charities to easily promote messages that undermine public health and well-being, it must be called into question.

"We hope OSCR will make it clear that 'advancing religion' isn't a license to spread harmful conspiracy theories and homophobia."

The Scottish government has also criticised the charity. A spokesperson said: "Deliberately spreading misinformation about the vaccine is irresponsible and reckless, and people should seek out accurate information from recognised sources."