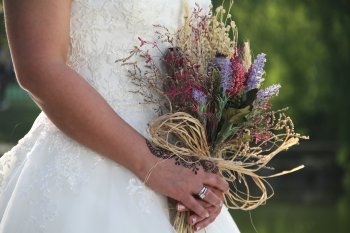 The government is consulting on plans to extend temporary measures enacted as a result of the Covid-19 pandemic allowing outdoor civil marriages and civil partnerships.

Under the proposals, outdoor civil ceremonies would be permitted to continue indefinitely, while new laws would also enable places of worship to hold religious weddings outdoors.

Laws in England and Wales only permit weddings to take place indoors at approved premises for civil ceremonies, or places of worship registered for marriage.

The only exception is for Jewish and Quaker weddings, which can be held anywhere.

The proposals would only apply to premises with linked outdoor areas. Venues would still be subject to many requirements in order to register as a premises for weddings.

The NSS, which campaigns for greater freedom and equality in marriage law, expressed support for the proposals.

In its response to the consultation, it said the proposals would "significantly increase freedom and fairness for all couples to marry how they want, and where they want – including outdoors".

The NSS said it hoped the proposal would be a "stepping stone" towards adopting broader reforms to wedding law proposed by the Law Commission last January.

Under the commission's proposals, supported by the NSS, restrictions on where weddings can be held would be removed, effectively giving couples of all religions and beliefs the same rights as Jewish and Quaker couples to marry where they wish.

The commission's proposed reforms would mean the legal status of the wedding would be determined by the presiding officiant, not the venue where it is held.

NSS head of policy and research Megan Manson said: "Allowing outdoor marriages will be an important step towards greater freedom and fairness for all couples, regardless of their religion or belief.

"However, the restrictive nature of our archaic wedding laws in England and Wales that tie weddings to buildings will continue to reduce opportunities for many, including same-sex couples and couples belonging to minority religion or belief groups. We therefore urge the government to adopt the proposals outlined by the Law Commission to make our wedding laws fit for the 21st century."

The consultation closes next Monday, January 24th. Responses can be submitted online here.