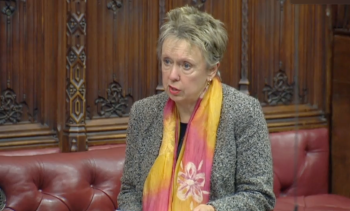 The private member's bill, introduced by Liberal Democrat peer Lorely Burt, cleared its third reading and will now head to the House of Commons where it will be picked up by Conservative MP Crispin Blunt.

The National Secular Society, which has long campaigned for an end to the law mandating worship in schools, has backed the bill, calling it a "positive step towards inclusive education".

All state schools are currently required to provide a daily act of worship that is "wholly or mainly" Christian in character. The law has long been widely flouted and unenforced. However, the government recently said it would "investigate" schools which breached the law requiring worship.

There is no independent right of withdrawal for young people, but pupils can be excluded at their parents' request.

The existing law has been criticised by a UN children's rights committee, which earlier this year asked the government what steps it was taking to repeal it. The UK is the only sovereign state in the world to legally impose Christian worship in schools.

Speaking in the House of Lords, Lorely Burt spoke of the "importance of enabling children to take part in inclusive assemblies as part of their school day, and the pressing need to address the current injustice – whereby those children who do not wish to take part in collective worship can at best be left twiddling their thumbs, and at worst be ostracised from their peers, while the structured school day carries on without them."

She said the bill "would instead free up schools to hold assemblies on topics parents do want to see covered and uphold children's rights to an inclusive education."

The government has insisted there is "no need" to amend existing legislation on collective worship. The bill is therefore unlikely to be given the support it would need to have any realistic chance of becoming law.

"All aspects of school life, including assemblies, should be equally inclusive of all pupils, irrespective of their religion or belief background. The government's failure to meet its human rights obligations by ending mandated worship in schools is inexcusable. Pupils should be able to decide for themselves whether to engage in worship, not have it imposed on them by law.

"The collective worship requirement is a relic from a society nearly unrecognisable from the one we live in today. Parliamentarians from across the political divide should seize this opportunity to promote pupils' freedom of religion or belief and a more inclusive approach to state education."