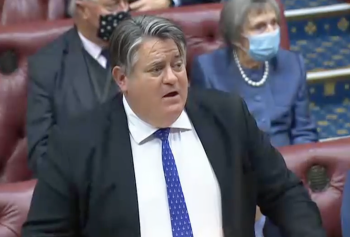 Stephen Greenhalgh (pictured), minister of state at the Department for Levelling Up, Housing and Communities, said 'Islamophobia" has been used as a "heckler's veto to shut down alternative opinions".

The warning came in response to an oral question from Mohamed Sheikh about the government's position on adopting a formal definition of Islamophobia.

The minister said the government "utterly condemned the prejudice, discrimination and hatred directed towards British Muslims due to their faith", but criticised definitions of Islamophobia that conflate anti-Muslim hatred with race and fail to deal with issues around sectarianism.

"We need to come up with a way forward that does not compromise free speech, and that is absolutely what we are committed to doing," said the minister.

Speaking during the debate Claire Fox warned that the concept of Islamophobia was "muting any criticism of Islam as a religion and Islamism as a political ideology". She pointed to the "nervousness of politicians from all parties in supporting the Batley Grammar School teacher who was forced into hiding" and cautioned that accusations of 'Islamophobia' were "effectively allowing a default blasphemy law to be snuck in".

Greenhalgh agreed that the term was being weaponised by particular groups to undermine free speech.

The minister accepted that 45% of religiously motivated hate crimes were against Muslims and said the government had provided £4m of funding to the anti-Muslim hate monitor Tell MAMA over the last five years. £1.8m was also provided through the Faith, Race and Hate Crime Grant scheme to support established community groups and civil society organisations.

In June, the government rejected a definition proposed by the All-Party Parliamentary Group on British Muslims, saying it was "not in line with the Equality Act 2010 and would have severe consequences for freedom of speech".

The definition has however been adopted by the Labour Party, Liberal Democrats, Green Party, Scottish National Party and a number of local authorities.

"Whilst we unreservedly and emphatically condemn anti-Muslim hatred, the uncritical and hasty adoption of the APPG's definition of Islamophobia has been concerning.

"Spurious allegations of Islamophobia can all too easily be deployed to shield Islam and even extremists from criticism. Formalising the current definition therefore risks further chilling necessary debate around Islam and public policy. Not only does this impinge on free speech, but it also risks undermining social cohesion and efforts to tackle Islamist extremism".