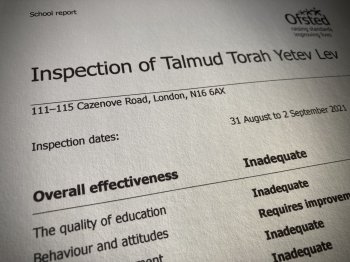 Talmud Torah Yetev Lev, an orthodox Hasidic Jewish school which operates from four premises in the north London borough of Hackney has consistently failed inspections since 2014.

Inspectors found that pupils were only "knowledgeable about their own community" and their knowledge and understanding of the major religions and cultures represented in modern Britain was "very limited". This indicated "poor social and cultural development", said inspectors.

"This, coupled with the limited development of English language and literacy skills, means that pupils are not well prepared for life in modern Britain", said the report.

According to inspectors, pupils do not achieve as well as they should due to too many teachers not having a good knowledge of the secular subjects they teach.

The school was also found to be in breach of its registration agreement by having 985 pupils on its roll, despite only being registered to admit 567.

"Too many independent religious schools have a reputation for poor standards of education. All children, including children of ultra-orthodox families, should be entitled to a rounded education.

"Children in consistently failing schools have been failed for too long. The intransigence of religious groups running such schools cannot be tolerated indefinitely."