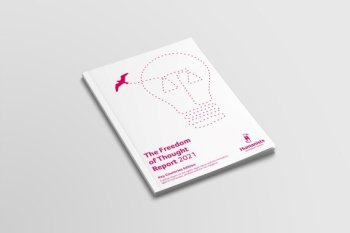 Pakistan does not have a death sentence for "apostasy", but it does for "blasphemy", and the threshold for blasphemy is low. So in effect, there is a death penalty for expressing atheism or converting religion in at least 11 countries, of which all are Muslim-majority.

This year's edition of the report, released today, also found that apostasy is a criminal offence in 17 countries. Blasphemy remains punishable in 83 countries, of which the death penalty may be applied in six.

The report, which focuses on the rights, legal status and discrimination against humanists, atheists, and the non-religious, has a key countries section whereby some of the best and worst performing countries are analysed. Afghanistan, now wholly governed by a Sunni Islamist fundamentalist group, the Taliban, was the worst on the list.

The report concluded that small communities of religious minorities, including Hindus, Sikhs, Christians, Ahmadi Muslims, and Baha'is experienced egregious human rights violations and remained endangered, without the ability to observe their faith publicly. It also mentioned the killings of nine ethnic Hazara (who are predominately Shia Muslims) men and the unconfirmed killing of two atheists, with a further four missing.

Women in Afghanistan have also faced the brunt of the new Taliban regime according to the findings, with beatings imposed on those who fail to wear hijab 'correctly'. Unmarried and widowed women from the ages of 15 and 45 are also threatened with forced marriages and sexual enslavement to Taliban fighters. The Taliban regime also announced that women would not be able to work or attend university until it was it was possible to ensure the segregation of the sexes in an "Islamic environment".

Other notable countries on a Watch List that Humanists International was closely monitoring include:

• Iran, which executes dozens of individuals on charges of "enmity against God" (moharebeh). Soheil Arabi, who the National Secular Society has campaigned for to be released, has been imprisoned for long periods on these grounds.

• Pakistan, which has suffered chronic violence against religious and non-religious minorities, with Shia Muslims subjected to most of it. Extremely serious incidents against the Ahmadi Muslim and Christian community have also been reported.

• Saudi Arabia, which mostly does not allow religious expression in the country other than their fundamentalist brand of Sunni Islam. Moreover, the country has notably spent over $1bn in hosting and investing in sports events ('sportswashing') to mask its extremely poor human rights issues.

The report also concludes that 39 countries across the globe have state religions, of which 35 derive legislation (wholly or partly) from religious law. In addition, the use of religious courts on family or moral matters exists in 19 countries.

The provision of mandatory religious instruction in state-funded schools without a secular or humanist alternative exists in 33 countries.

"Wherever religion dominates political and public life, the rights of women, LGBT people, apostates, nonreligious people and religious minorities are threatened. As the report demonstrates, this situation is still all too common in the modern world."

President of Humanists International, Andrew Copson, said the "discrimination which humanists and other non-religious people continue to face as a result of daring to express their beliefs and to try to live according to their conscience" made for "grim reading".

UN Special Rapporteur on freedom of religion or belief, Dr. Ahmed Shaheed, welcomed the publication for recording the experiences of "not just humanists and the non-religious globally, but also those are deeply religious yet are dissenters".