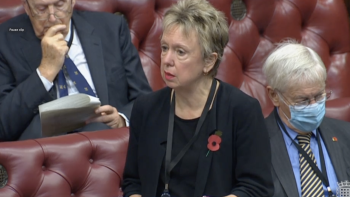 The private member's bill, introduced by Liberal Democrat peer Lorely Burt (pictured), today passed through its committee stage in the House of Lords and will progress to a third reading if the government makes time available for debate.

Faith schools would still be able to hold collective worship, but would be required to provide a meaningful alternative for pupils withdrawn.

A majority of peers supported the bill at its second reading in the House of Lords in September.

The National Secular Society, which has briefed peers throughout the bill's progression, has also welcomed the bill as a significant step in the right direction.

In its briefing, the NSS said the bill "responds to successive governments' failure to reform the law or guidance surrounding collective worship."

It said it "provides relief" to the majority of non-faith schools which "must currently skirt the law in order to provide inclusive assemblies", and "resolves conflicts" between the legal requirement for collective worship and human rights laws and obligations.

But the government is opposing the bill, which makes it unlikely to become law.

NSS head of education Alastair Lichten said: "The government has no business mandating worship in schools, and schools have no business coercing religious observance from pupils.

"Inclusive assemblies that do not incorporate acts of worship are far more suited to 21st century education and far more conducive to a cohesive school environment where all children from all backgrounds are treated equally.

"The cross-party support and incoherent opposition to this bill shows the clear will for change. The government should ensure this bill has time for debate, as a first step in fulfilling their duty under the UN Convention on the Rights of the Child to respect pupils' freedom of belief."