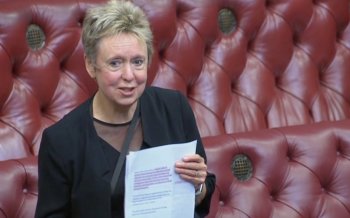 A majority of peers have supported a bill to end the duty on non-faith schools in England to hold daily acts of Christian worship, and instead require them to hold inclusive assemblies.

A private member's bill, introduced by Liberal Democrat peer Lorely Burt (pictured), was subject to a debate in the Lords on Friday. The bill will now proceed to committee stage.

The National Secular Society has welcomed the bill as a significant step in the right direction. The NSS briefed peers ahead of the debate.

Faith schools would still be able to hold collective worship, but would be required to provide a meaningful alternative for pupils withdrawn.

The case for change

Arguing for the bill in the Lords, Burt described it as "an opportunity to help all children, regardless of their background, to feel included and welcomed in the community of their school".

She added that British society had become more "diverse" and "multicultural" in recent decades.

"We put more store on children and their rights - except in the UK, and except in this matter of compulsory religious worship."

She also highlighted negative experiences of compulsory worship which are reported through the NSS website.

The government is opposing the bill, which makes it unlikely to become law.

Responding to the bill on its behalf today, Carlyn Chisholm insisted that legislation around collective worship is "inclusive" and "allows all schools to tailor their provision to suit their pupils' spiritual needs".

But she added that the government "stands by" a policy of not allowing schools to replace worship with non-religious assemblies.

Molly Meacher, a crossbencher, warned that if shared values were conveyed "within a religious narrative" there was "an extremely high risk" that children would "disregard" them.

Crossbench peer Elaine Murphy said compulsory worship was "inappropriate" and called the government's failure to get to grips with this situation "disgraceful".

Natalie Bennett, the former leader of the Green party, said laws requiring religious worship in schools "weakened our position as an advocate for children's rights around the world".

Burt also highlighted a "diversity of views among Christians" and a former bishop of Oxford, Richard Harries, spoke in favour of the bill, arguing that the legal situation "doesn't reflect who we are as a society".

The current bishop of Oxford spoke in opposition from the bench of Church of England bishops, arguing that the current arrangement "works well".

"Mandating worship by law in schools is archaic, inappropriate and wholly incompatible with freedom of religion or belief.

"Ministers should stop trying to justify the unjustifiable and instead fulfil their duty under the UN Convention on the Rights of the Child by repealing this ridiculous requirement.

The NSS wrote to peers ahead of the debate to make similar points, and noted that many families have little choice but a faith school.

The current law has long been widely ignored, with the de facto acceptance of the Department for Education and Ofsted inspectors, and evidence suggests it is unpopular. Many schools hold inclusive assemblies with no directed religious worship.

But the government recently said it would "investigate" schools which breached the law requiring worship in schools.

The UN Committee on the Rights of the Child recently asked the UK what steps it was taking to repeal laws requiring worship in schools.