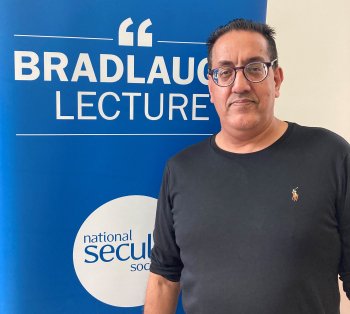 Culture shouldn't be an excuse for inaction on issues such as forced marriage, honour-based violence and child sexual abuse, the former prosecutor Nazir Afzal has said in a National Secular Society lecture.

Afzal, who worked as chief crown prosecutor for the north-west of England, reflected on his distinguished career as he delivered the NSS's 2021 Bradlaugh Lecture at Manchester Art Gallery on Saturday.

He said society should be prepared to have "difficult conversations" and spoke of the importance of standing up for the rights of those who often go unheard.

He reflected on his role in the prosecution of 'grooming gangs' in Rochdale and the killers of Banaz Mahmod, a young British-Iraqi who was murdered in an honour killing in 2006.

He said the grooming cases had been dismissed before he took them on because vulnerable girls hadn't been listened to, and there was an assumption that no jury would believe the victim.

He said people felt more confident coming forward after Rochdale, and noted that the revelations about Jimmy Savile's abuse followed that case.

He also described the Mahmod case as "pivotal", as it led to national police guidelines for tackling honour-based abuse.

"Community leaders who lead nobody"

Afzal said the authorities should listen to the voices of those affected by the issues he'd confronted, along with NGOs and experts who worked on them.

In contrast he sounded a sceptical note over those in positions of authority who treat community leaders as representative of broader communities.

He said he'd "wasted plenty of time" talking to "community leaders who lead nobody".

He also said it was important to marginalise extremist voices within Muslim communities, which he said were often unduly amplified in public conversation, and not representative of opinion among Muslims.

He also said Muslims face "daily" abuse, but that shouldn't be a reason to avoid tackling genuine problems.

He spoke of his work in response to the row over the publication of Muhammad cartoons in 2006. He brought prosecutions against those who publicly demanded beheadings for those who insult Islam, on the grounds of inciting murder. In response he was put on an al-Qa'eda 'death list'.

He also spoke of facing racism, particularly when he grew up in Birmingham, and of far right efforts to delegitimise his work, as he had "damaged their narrative" by bringing the grooming cases. He faced threats, was the target of 'fake news', and had thugs outside his home.

He also gave thoughts on subjects including home schooling, relationships and sex education, and safeguarding in the Catholic Church. He recently began chairing the church's safeguarding body for England and Wales.

NSS chief executive Stephen Evans said it had been "an absolute privilege" to host the lecture.

"Nazir Afzal provided a fascinating insight into a broad range of hugely important subjects. He showed the importance of confronting tough issues and providing a voice for those who often go unnoticed.

"There was plenty to learn for anyone with an interest in human rights and social cohesion, and we're very grateful to Nazir for delivering this lecture."

We'll have a video of the lecture available in due course.