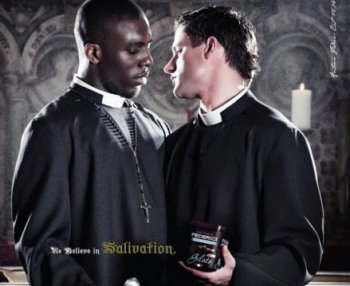 The National Secular Society has alerted the bodies which write advertising regulation guidelines that new proposals may result in greater religious censorship.

CAP and BCAP have launched a consultation over proposed rules designed to increase protection to "those sharing protected characteristics" as defined by the Equality Act 2010.

The proposed rules say marketers and broadcasters "must have particular regard to the likelihood of causing harm" to vulnerable people and to characteristics including "religion or belief".

The consultation document did not define "harm", saying it "is a commonly understood term".

In response to the consultation, the NSS said a religious person could argue they were 'harmed' by an advert that offended their beliefs. This could lead to censorship of depictions of people representing other protected characteristics.

The NSS cited past examples of such censorship:

The NSS recommended that CAP and BCAP "re-consider the necessity of these additional rules" and "provide greater clarity" as to what is meant by 'harm'. It said CAP and BCAP should make explicit reference in the guidance to the need to protect free speech and to avoid the harm that over-censorship of marketing and advertising materials can cause to people on the basis of their protected characteristics.

NSS head of policy and research Megan Manson said: "Equality law exists to protect individuals from harassment, discrimination and victimisation, not to protect ideas or the interests of religious institutions.

"Censoring adverts to appease religious interest can harm people on the basis of other protected characteristics, including sex and sexual orientation, by reinforcing regressive social stigmas. It is also corrosive to free speech, and in effect partly brings back the 'blasphemy laws' which were abolished in 2008.

"CAP and BCAP's proposed rules are well-intended. But without a clearer definition of 'harm', it is difficult to see how these rules will not inevitably lead to greater censorship of material that may offend religious beliefs – and, in turn, harm the very people that CAP and BCAP seek to protect."

The consultation closes on August 24.