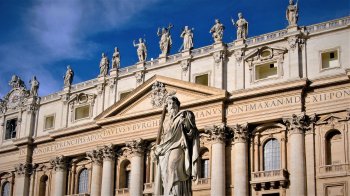 UN special rapporteurs have criticised the Vatican over child sexual abuse in stronger terms than ever before, highlighting that there have been "tens of thousands of alleged victims" over "decades".

This week the office of the UN high commissioner for human rights has released a letter which it sent to the Holy See in April (English translation available).

It details significant abuse in eight countries and highlights concerns over the Vatican's "obstructionist practices".

The letter expressed regret that there had been no response to a separate communication which the rapporteurs sent in 2019.

The latest letter has only been made public, as they had threatened, because it had not been replied to either.

The rapporteurs referred to "persistent allegations" that the Catholic Church had obstructed and failed to cooperate with domestic judicial proceedings, in order to "prevent" accountability for abusers and compensation for victims.

They urged the Vatican to "refrain from obstructionist practices" and to "cooperate fully" with the judicial authorities within states.

The rapporteurs also raised concerns over concordats and other agreements which the Holy See has negotiated with states, which limit civil authorities' ability to "interrogate" or "compel the production of documents or prosecute persons associated with the Catholic Church".

They cited as an example a refusal to provide files to a prosecutor in Argentina, which the Catholic Church justified by citing a concordat which had already been declared unconstitutional.

The rapporteurs also expressed regret that the Vatican had not yet made it mandatory to report crimes to the civilian authorities, as the UN urged in 2014.

The letter also highlighted a series of other concerns, including that the church had:

The National Secular Society has observed numerous examples of the various complaints cited by the rapporteurs. The NSS sent the rapporteurs two detailed reports on the subject last year.

NSS president Keith Porteous Wood said: "The Vatican has largely ignored the recommendations of UN experts for years, despite the horrific extent of clerical abuse becoming ever more evident.

"We commend the rapporteurs for their efforts on behalf of justice and abuse victims. We urge state parties to support victims by applying pressure on the Vatican to conform to human rights obligations and to heed what the UN experts call for."

Meanwhile the Vatican has been accused of "unprecedented" meddling in Italy's legislative process by Italian politicians and activists after it formally opposed an Italian bill expanding anti-discrimination protections for LGBT people.

The Holy See claims the proposed law violates a 1985 concordat regulating relations between the Catholic Church and the Italian state.

This concordat amended the earlier Lateran Treaty, which was signed in 1929 by Benito Mussolini on behalf of the Italian government and later confirmed by the Italian constitution of 1948.

The website concordatwatch.eu details the many concordats which are still in effect.

Image by Vali Ciudin from Pixabay.