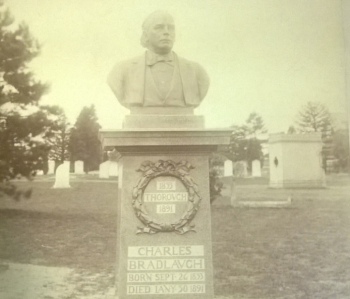 The National Secular Society has launched a fundraiser to restore the grave of its founder Charles Bradlaugh MP, which has fallen into disrepair in recent decades.

The NSS has launched an appeal inviting members and supporters to contribute to the project, which is estimated to cost £12,000.

Bradlaugh was a 19th century political activist who argued for the abolition of the blasphemy law and the disestablishment of the Church of England.

He died on 30 January 1891 and was buried at Brookwood Cemetery, also known as the London Necropolis.

In 1893 a monument was erected over his grave incorporating a substantial bronze bust of Bradlaugh by Belgian artist François Verheyden.

The monument has twice suffered theft and vandalism in 1938 and 1968, when the bust was stolen. The bust has not been replaced.

The NSS is working with the cemetery to restore the grave, and has commissioned the manufacture of a new replica bust.

An information panel with details of Bradlaugh's life will also feature as part of the project.

NSS chief executive Stephen Evans said the fundraiser was "an opportunity for all who support secularist principles to play their part in making sure Charles Bradlaugh's remarkable legacy is properly recognised".

He said: "Bradlaugh's grave now stands neglected and forlorn – hardly a fitting tribute to the NSS founder and one of greatest secularists and radicals to have lived.

"We encourage all our members and supporters to donate and help fully restore his grave, and return his bust to its rightful place."

Donations can be made online via the fundraiser page. The NSS hopes to unveil the finished bust at a ceremony later in the year.

Donate to our appeal to restore the grave of our founder, Charles Bradlaugh.