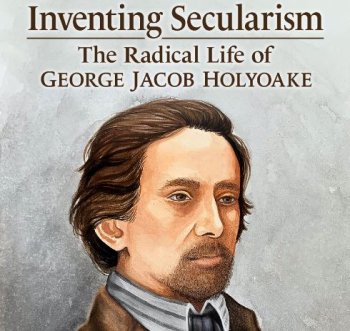 The National Secular Society will host a book launch for the first modern biography of George Jacob Holyoake, a key figure in UK secularist history, on Thursday 22 April.

Inventing Secularism: the radical life of George Jacob Holyoake, by Ray Argyle, describes the life of Holyoake, who coined the term 'secularism' and was one of the first members of the NSS.

The launch will be held online and begin at 7pm. During the event the author will read from one of the book's chapters explaining how the idea of secularism came into being.

He will also be joined by freelance writer and NSS podcast producer Dr Emma Park to discuss Holyoake's role in winning freedoms which we take for granted today.

Holyoake was a 19th century radical who became involved in a wide range of progressive causes and was jailed for blasphemy.

He is widely credited with coining the term 'secularism' in 1851 and later became involved with the NSS's activities.

Ray Argyle explained that he wrote Holyoake's biography "to see this transformative figure receive the public recognition he deserves".

"Holyoake's invention of the word secularism in 1851, and his idea of a public sphere free of religious influence, was crucial in saving the West from despotism. Secularism accelerated the shift to independent thought and scientific enquiry, hastening the emergence of the modern world.

"I also wanted to warn readers that secularism today is under siege, facing possibly its greatest threat at any time since Holyoake's era. Christian fundamentalism and Islamic extremism are today endangering our freedoms to a degree not seen since the reign of religious absolutism."

NSS chief executive Stephen Evans said: "We are excited to host the launch of the first modern biography of a major figure in the history of secularism.

"Like so many figures in secularist history, Holyoake faced profound injustice and oppression in his struggles to make the UK more equitable and democratic for all. This history shouldn't be forgotten.

"We look forward to hearing Ray Argyle's reflections on his research into Holyoake's life."