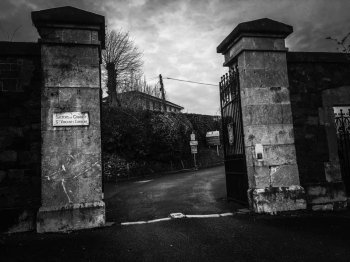 A UN committee has asked Ireland to take steps to guarantee accountability for past human rights violations in religious settings and highlight its progress on providing access to secular schools.

The Human Rights Committee (HRC) questioned Ireland over these issues as part of its recent universal periodic review (UPR) process, which monitors the human rights records of all UN member states.

The review highlighted several concerns which the National Secular Society raised in a submission in advance of the UPR.

The committee has requested information from the Irish state about steps taken to "guarantee accountability and remedies for past institutional abuse of women and children".

This includes abuse which took place in schools, care institutions, religious institutions, and institutions for women and children – the Magdalene laundries (site of one pictured) and mother and baby homes.

These institutions housed women who had children without being married, and were usually run by religious orders which were predominantly Catholic.

The committee also asked about steps taken "to foster a process of truth telling, reconciliation and learning".

The review closely reflected some specific recommendations which the NSS had made.

For example, it called on Ireland to set out how many prosecutions had been brought for failure to report child abuse under its Children First Act, and their outcomes.

The act was passed in 2015 in an attempt to deal with institutional abuse.

Since the publication of the committee's recommendations, Ireland has published a report highlighting the state's failure to uphold its duty of care to women and children in mother and baby homes.

The UN's report also asks Ireland to report on the measures it has taken to ensure "the right to freedom of conscience and religious belief is fully respected".

It asks whether "progress has been made in the implementation of other measures recommended by the committee to improve access to secular schools".

The NSS's submission raised concerns over the number of non-Catholic families whose only available school is one with a Catholic ethos.

"The long-standing, close ties between Ireland's state and the Catholic Church have often undermined human rights. The committee is right to push the state to address this in two significant areas.

"The steps recommended to tackle institutional abuse will make it easier to give redress to victims, hold abusers to account and prevent abuse.

"And improving access to secular schooling will help to advance the fundamental right to freedom of religion and belief, in a country with an increasingly non-religious and religiously diverse population."