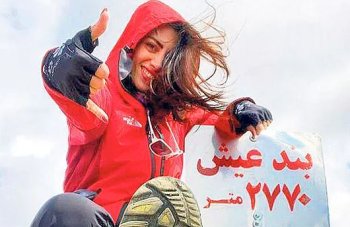 The National Secular Society has urged the Foreign Office to take up the case of an Iranian women's rights activist who faces a long jail term for protesting against mandatory Islamic veiling.

Nasibe Semsai (pictured) faces being deported to Iran after being arrested in Turkey, where she had fled after being sentenced to 12 years in prison, as she was trying to flee to Spain.

She was a prominent supporter of Iran's 'White Wednesday' protests – which have encouraged women to take off their hijabs, in defiance of the legal requirement to wear them in public – or wear white.

Her brother told The Times she had refused to sign papers for her voluntary deportation, and asked European countries to "protect my sister". He added that she was "always thinking about freedom and what she can do for other women".

Thousands of women have joined the White Wednesday movement, with many sharing photos and videos online, since it was launched in 2017.

He expressed concern that Nasibe Semsai could face grave violations of her human rights on account of her religious and political opinions if she is returned to Iran.

Mr Evans said: "Iran's forced veiling laws are an affront to women's rights and human dignity, and those who peacefully protest against them deserve our unqualified support.

"We urge the Foreign Office to do what it can to ensure Nasibe Semsai is protected and her rights upheld.

"This is also a reminder of the damage which Iran's theocratic government continues to do to fundamental human rights, and another sign of the harm caused by Turkey's alarming turn towards Islamism."

Last week it also emerged that an Iranian women's rights activist who has been sentenced to 16 years in prison for taking part in White Wednesday protests, Yasaman Aryani, has tested positive for Covid-19 in jail.