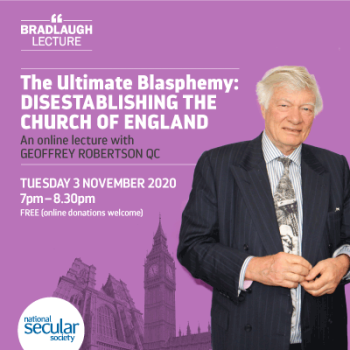 The National Secular Society is very pleased to announce that human rights barrister Geoffrey Robertson will make the case for disestablishing the Church of England in this year's Bradlaugh Lecture.

The lecture, entitled The Ultimate Blasphemy: disestablishing the Church of England, will be an online-only event on Tuesday 3 November, from 7:00pm to 8:30pm. The NSS is hosting it in partnership with Conway Hall.

During his long legal career, Geoffrey Robertson QC has defended blasphemy cases against Gay News and The Satanic Verses. He is also an academic, author and broadcaster.

His lecture will argue that disestablishment is essential for democracy in the 21st century and explore how it might be achieved, while recalling the struggle to abolish England and Wales's blasphemy law.

The NSS has campaigned for the disestablishment of the church since its foundation in the 19th century.

NSS chief executive Stephen Evans said: "We very much look forward to hearing what Geoffrey Robertson has to say.

"The National Secular Society has long argued that the disestablishment of the Church of England would make Britain a more equal, fair and democratic country, which is better placed to uphold fundamental liberal principles.

"We think we've lined up a hugely successful and distinguished speaker to make the case for the formal separation of church and state. We urge supporters to join us for an entertaining and enlightening lecture."

History of the Bradlaugh Lecture

The NSS launched the Bradlaugh Lecture in 2017, on the 151st anniversary of the society's foundation, to provide space for a distinguished speaker to explore a secularist topic in depth.

The lecture is named in recognition of the NSS's founder Charles Bradlaugh. In previous years it has been held at Manchester Art Gallery in early September.

There are more details on the NSS's events page and you can now book your place on the Conway Hall website.

Tickets are free but the NSS strongly encourages at least a £5 donation to Conway Hall for those attending.